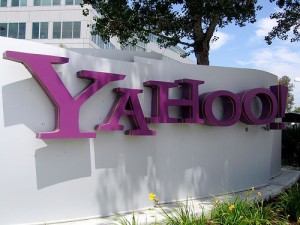 According to comScore’s latest Media Metrix report, a monthly report that identifies the top 50 web properties in the U.S., Yahoo nabbed the most visited website spot for the first time since spring of 2011. With nearly 197 million unique web visitors in July, the news set the interwebz abuzz. But does it matter?

comScore can’t explain the numbers and Yahoo hasn’t commented, so nobody really knows what caused it. Some speculate it’s because of Yahoo’s recent acquisitions, including Tumblr, but according to comScore, Tumblr traffic isn’t included in those numbers. Bottom line, these numbers fluctuate all the time.

We saw a bajillion posts last week when this news was announced, as if this was a major miracle and the end was nigh for Google. This is why the Internet is crazy and people should perhaps just slow down and do their homework before writing headlines that make a big deal out of everything without really thinking it through.

The reality is that Google, Microsoft (Bing) and Yahoo have always hovered near the top, as reported by Wired. Yahoo might have been up 8 million at months’ end in June; and it was down 4 million the month before that.

Yet, the most important thing to consider is that traffic does not a successful company make. Yahoo has yet to establish itself as a viable alternative for advertisers and, in spite of a spate of recent acquisitions, Yahoo is very much still in a rebuilding mode. I really liked how Wired’s Marcus Wohlsen described it (and I’m paraphrasing) …. a lot of eyes are on Yahoo now, mostly because of Marissa Mayer. But so far, that story is all about Mayer and her personal brand, not about Yahoo.

But most importantly, here’s what does matter. When it comes to search traffic, Google lays claim to two thirds of the pie. Bing nabs most of the rest, then comes Yahoo, with only a small percentage of search traffic. And search? That’s where the money is. In the last quarter alone, Google’s ad sales were in the $12 billion penthouse and Yahoo’s in the $1 billion studio apartment.

In case you’re keeping track, here are the rest of the numbers: Google came in at second place with 192 million uniques, Microsoft was next, with 180 million, and, in fourth place, Facebook, with 142 million. The Facebook stats are especially interesting, given that the site’s stats one year ago were 161 million. Know that comScore’s numbers don’t take into account any mobile traffic, so keep that in mind as you’re digesting this data.

And also, as AdAge points out just this week, we’re not even sure the comScore numbers are reliable because they measure Google and Yahoo in different ways. That’s an interesting read for sure, so check it out if this is a topic that interests you.

Here’s what I do know. I visit Google more times every day than I can possibly count. And the same is true of Facebook. When my seven-year-old second graders want to know something, they ask The Google. We never “Bing it.” Nor would it ever occur to us to “Yahoo it.” Oh, and if we’re doing search engine marketing campaigns, well, you know where we’re buying our ads.

What about you? What are your habits when it comes to search and web properties you visit? Is Yahoo on your radar screen?