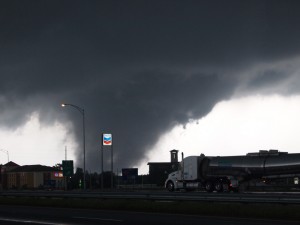 During a social media conference (or any conference, really), you expect to hear case studies and best practices that can help you refine your approach and strategy. Yet just as powerful is an opportunity to learn from someone else’s mistakes—and that’s exactly what James Spann discussed as part of his Y’all Connect presentation, “Don’t Be Scared, Be Prepared.” We liked it so much we thought you might, too.

When The Worst Happens

In late July, Alabama Power presented the inaugural Y’all Connect blogging and social media conference dedicated to practical takeaways in corporate storytelling. And James Spann, chief meteorologist for Birmingham’s ABC 33/40, had a heck of a story that demonstrated the very real turmoil of making a big mistake—and how to recover.

On April 27, 2011, an historic tornado outbreak ravaged Alabama, Mississippi, Georgia and Tennessee. More than 200 tornadoes touched down, killing 316 people (252 of whom lived in Alabama), injuring hundreds and causing damages of nearly $11 billion.

“Everybody in this room will have one defining career moment,” James said during his presentation. And that tornado outbreak was his. Although James and his fellow forecasters undoubtedly did a lot to warn viewers of the impending danger and keep them informed, he admitted during his presentation that he and his team didn’t do enough to serve people in rural areas, a realization that both haunts him and motivates him to be better.

Bob Carlton of The Birmingham News published an interview with James soon after the one-year anniversary of the outbreak, during which James discussed the questions that he still asks himself.

“How come more people didn’t pay attention to his warnings?” wrote Carlton. “What could he, should he, have done differently? Why did all those people have to die?”

The Mistake Is Made: 3 Ways To Recover

No matter what industry you’re in, here’s the inevitable truth: you’re going to make a big mistake. It could be a minor flub or it could be a really, really big deal. Either way, you can recover. James, for example, takes a three-part approach:

Love What You Do

Being passionate about your career certainly makes your work more enjoyable. And when a crisis happens, it can also give you the motivation you need to look for the light at the end of the tunnel and proactively seek ways to learn from the incident, rather than simply throwing in the towel and walking away.

This is a tough one, but it can make all the difference in the world. By admitting your mistakes, it shows integrity and your willingness to take stock of what happened and make the necessary changes so that the incident doesn’t repeat itself. James has been incredibly candid about the tornado outbreak and what he could have done better. And that honesty lays a foundation for fixing what went wrong, rather than hiding behind blinders and hoping for the best.

Put Others’ Needs Before Yours

Whether you’re dealing with clients, customers or employees (or a mix of all three), making sure they come first—especially in a stressful situation—can put you on the path to recovery. For James, the viewers took precedence—and to this day, he continues to focus on how the station can better serve them. If you find yourself in the midst of a crisis, examine who’s been impacted and do what you can to help them, reassure them and better serve them. That’s how you forge the relationships that can withstand tough times, rather than those that are merely self-serving and crumble under pressure.

At the end of the day, it’s all about embracing the knowledge that, at some point, you’ll make a mistake—and that might just be your defining career moment. By having a plan of attack, you’ll not only help minimize damage—you’ll also put yourself (and all involved parties) in a position to learn from what happens and use that experience to fuel future success.

Have you had what James called a defining career moment? If so, did you learn any hard lessons that you continue to apply today?

Note from Shelly: Katy and I loved our trip to Birmingham for Y’All Connect and you’ll be seeing more posts from us about the great sessions we were fortunate enough to sit in on. I loved the opportunity to present to a group of smart, motivated attendees all passionate about learning more about corporate storytelling and social media and how the two are intertwined. Next year, keep this conference on your radar screen, as Wade Kwon and his team did a terrific job and there was much learning to be done—not to mention a fantastic collection of really awesome speakers including friends like Ike Pigott, Mack Collier, Jenny-Rebecca Schmitt, Andrea Weckerle, Erika Napoletano and so many more.