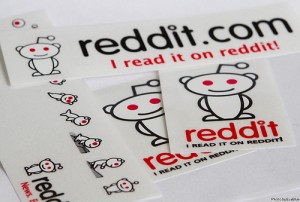 A colleague pointed to a really cool blog she’d discovered on Twitter the other day and while poking around the site/blog and getting to know the writer (a/k/a stalking him on the interwebz), it was also exciting to find a young civil engineer writing about, you guessed it, engineering.

There are two things I was most excited about discovering this blogger and they relate to both the value of blogging in the A/E/C space as well as why Reddit should be on your radar screen.

The Value of Blogging in the A/E/C Sector

Thomas Michael Wallace, a young civil engineer living in the UK, is a smart guy and a good writer. In his Being Brunel blog, he writes about things that engineers think and talk about. Interesting things like Track, Structure and Interaction, Five Ways to Annoy Contractors, Engineering Extensions in ExCel–you get my drift. Most importantly, he writes about things he knows, things he knows other people in the field (and possibly prospective clients) might want or need to know, and he does it in a down-to-earth, easy to read, approachable manner. How valuable do you imagine that his ability (and willingness) to put it all out there in terms of how he thinks, how he solves problems, what issues he thinks impact people in the A/E/C space, etc. might be to him as he forges his career as a civil engineer? I think it makes him attractive to clients and prospective clients and it likewise might well make him attractive to someone looking to lure him away. That’s the value of blogging and sharing your thoughts, your IP, your abilities—when you throw it out there, it can come back to you a hundredfold in the form of new clients, new opportunities and great personal brand exposure. Conversely, when you keep all the “good stuff” to yourself (which is what a lot of people in a lot of companies, especially in the B2B space like to do), well, there can be a downside.

Why You Should Want to Pay Attention to Reddit

The other real value I took away from Wallace’s blog is that through one simple post and a clicked link, he illustrated how valuable a site like Reddit can be for engineers and future engineers. Billing itself as “the front page of the Internet,” Reddit was launched in 2005 as an online community comprised of user-submitted content that largely survives by being voted up or down by the community members. The audience is technical and not interested in being spammed or marketed to.

Here’s an example—the community Wallace’s blog led me to is a community thread called “Ask Engineers: We’ll Fix it Until It Breaks.” With some 19,998 readers and many active threads on all kinds of engineering-related topics, I immediately saw how we might be able to use Reddit to benefit what my clients in the A/E/C space are doing. 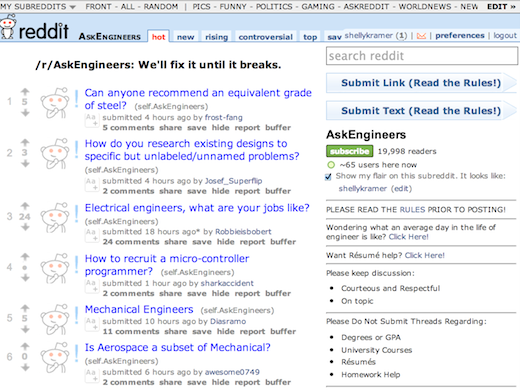 As you can see, for someone wanting to engage with, learn from or potentially even recruit engineers, Reddit could well be a veritable goldmine. The resource that Wallace provided, the way he opened my eyes to a new way of looking at Reddit and the value it could provide in terms of not only performing my own job, but also serving the needs of my clients—well, it’s huge. I love it when that happens.

I needed that. I have tons of friends who are active on Reddit and it’s just not a place I’ve had much time to devote to. And I know enough to know that no social network really delivers any value to you if you’re not willing to invest time in building relationships and participating in the community there. I know I should find time for Reddit—and this one blog, discovered by happenstance, might just be the catalyst for that.

The Power of the Web

We do a lot of work with clients in the A/E/C space and this sector in particular has been somewhat slow to adapt to the integration of the web, content marketing, social and SEO into business practices. Which is actually a good thing for us, because it allows us to work with great people and help them make that happen.

It’s not unusual that senior managers tend to think that assigning a staffer to push out content on a regular basis on Facebook and Twitter means they’ve “got social covered.” No strategy, no connection to business initiatives, oftentimes no corporate blog, no measurable tactics in place — just pushing out news releases and “aren’t we great” statements as often as possible. That is in no way whatsoever “having social covered” and sooner or later, they’ll figure that out.

The reality of business and communication in any industry in any sector is that the web impacts what we do. And the web is comprised of people. People who are writing and publishing what they’re doing and thinking about, engaging in online conversations on sites like Reddit and Twitter and LinkedIn, etc., and not only building their networks and expanding their reach and thought leadership within their respective industries; they’re also talking with and learning from one another all the time.

Thomas Michael Wallace gave me proof of something that I already know—the power of the blog in the A/E/C space–as well as something that I didn’t—the power of Reddit when it comes to connecting with engineers. And now, I’ll be reading, learning from and sharing his blog on a regular basis as well. I’d say I win.