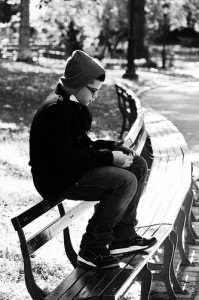 If you’re a parent of a teenager, Ask.FM should definitely be on your radar—and not for a good reason. The Q&A app might, on the surface, seem innocent—yet it’s become a hotspot for profanity, innuendos and even bullying.

The backstory—I know about Ask.fm because of a recent conversation with a good friend and the mom of a teenage girl. We were discussing the dangers of the Internet and how teens don’t really understand why people like us (tech savvy web geeks) are such freaks about it. As I lambasted SnapChat and we discussed the dangers of Instagram and Kik messenger, she pointed me to Ask.fm and said it was her teen’s favorite site—and something high on her radar screen for potential danger to kids. That was all I needed to hear to want to know more.

Why Ask.fm Is Trouble

Once you sign up, Ask.fm encourages you to add friends by connecting to a Facebook or Twitter account. Always awesome. After that, you’re invited to start answering questions like “Do you remember your first friend?” or “What was the last time you were angry? What happened?”

The big problem? These questions can quickly devolve into discussions of a sexual nature or troubling topics like suicide and eating disorders. And because the site has a primarily young user base (ages of 13 and 25), it’s a veritable playground for predators, who can gain access to user profiles and information simply by signing up for the site.

A Veritable Playground for Sexual Predators

I’m a mom experienced at raised teens during a time when one of the biggest dangers on the Web was Internet chat rooms. I’m now raising kids who’ve had devices in their hands pretty much since the moment they were born. I’ve lived this and I am living this, right along with you. Let me tell you, without question and from personal experience, sites like Ask.fm and Instagram and so many others are a sexual predator’s amusement park. And sexual predators–they know far more about the web and how they can use it to exploit than you do.

Sexual predators flock to sites like this and are quick to see the “value proposition” for their twisted minds. They pose as kids. They ask questions to gauge how old a kid is and quickly find out where they live. They are masterful at assessing how gullible your kid is and work to manipulate and gain trust. They get all the information they need because your kid doesn’t know any better. How could they? They think they’re talking to someone their own age. And they love making new friends. Friends who understand them. And those sexual predators, this is a cakewalk for them. Once they gain your kid’s trust, the next logical step is to try and set up a meeting.

Your kid is bait. Fresh, nubile, trusting, personal-information-vomiting-bait. Doubt me on this front? I’ll just ask you one question: how much are you willing to gamble with your kid’s safety? What about his or her life?

Then There’s The Bullying

Bullying is not a hypothetical problem—it’s a huge issue and one that is in part fueled by the web. I have 7-year-olds and we’ve seen (and experienced) multiple instances of bullying already–in first grade. Holy crap.

Add the Internet and teenagers and emotions and insecurities that are all part of growing up and bullying is a monumental problem. We hear stories on a daily basis of kids committing suicide because of photos or videos or other content shared on the web and that’s not getting better any time soon. Take a gander at these stats from Bullyingstatistics.org as related to bullying and suicide:

Look at what a quick Google search about teen bullying and suicide brings up, and hopefully you get my point. This is a massive problem. And if you have teens, something that should be on your radar screen.

One of the things that I imagine is attractive to teens about Ask.fm is anonymity. But as adults well know, anonymity combined with the Internet can lead to troll-like behavior and hatred all too easily. And for teens who don’t yet know any better, anonymity and what happens as a result of being able to hide online can enable already problematic situations to spiral out of control.

“The 13-year-old daughter of a CNET colleague said that Ask.fm was the cause of frequent conflicts at her school,” writes CNET’s Jennifer Van Grove. “The service became popular with her friends, mostly kids between the ages of 12 and 14, in March. Now everyone at her school has ‘an Ask.fm,’ she said.” Remember that stat about 200,000 new users every day? Yeah, that could be your kid.

This widespread use is one of many reasons that Ask.fm can be incredibly dangerous. In the CNET story, Ask.fm co-founder Ilja Terebin says the site performs automatic and manual content moderation around the clock to remove sexually explicit posts and derogatory language. A quick check through recent activity, however, and that claim seems questionable, if not downright false. Sounds about as reliable as SnapChat’s founder claiming that teens using his site for sexting never occurred to him. He’s an idiot.

For anyone anywhere to EVER think that something on the web is completely anonymous (or erasable), wake up and smell the coffee. Videos that are supposed to self-destruct? Ever hear of a screencapture?

Oh and by the way, that anonymity that Ask.fm thinks is so super cool? There’s a hack for that. So, say your kid says or shares something stupid on the site. Someone like me (or someone who has more dubious intentions in mind) can discover their identity in 20 seconds or less. Is your head reeling yet with the possibilities here? I hope so.

How To Protect Your Teens

Kids are dying because of what happens on the Internet. Families are filing lawsuits asking for sites to be taken down because they’ve lost their children. And parents—well, I don’t think many are paying attention, or if they are, they’re not paying enough attention.

Many friends I talk with about this think it’s cute that their kids are using Instagram and SnapChat, Kik and Ask.fm. They laugh and say “those kids, they know more about the Internet than I do!” And they are right. Parents think they know what’s going on, but really, I suspect many are clueless.

Most people don’t know as much about the Internet as my friends and I do, and I don’t say that to lord it over you. I hope to scare the hell out of you and make sure you realize how critical online safety is to your kids. And I hope that you’ll start paying lots of attention to what your kids are doing online. Today.

As troubling teen-targeted tools like Ask.fm, Snapchat, Kik Messenger and the more recent Privatext continue to flourish, it’s more imperative than ever to not only monitor how your kids are using the Internet, but also educate them on how to be safe.

All of these sites claim to offer privacy and anonymity, but, really, there’s no such thing on the Internet—and that’s imperative for teens to understand. It’s more important for parents to understand so they can protect their kids. Not only could supposedly secret information they share be used against them by potential bullies—it could also leave a digital trail that might compromise a future job search or hinder chances of a college acceptance.

How to Keep Kids Safe

Educate yourself about Internet safety. Read as much as you can get your hands on and for all that’s holy, don’t get your information from your kids. Talk to your kids about online safety just like you would any other serious topic. The best you can do is educate them and give them the knowledge to help encourage responsible decision-making—and hopefully they’ll follow suit. Nagging them to death works, too.

And then consider this safety checklist. And maybe even print it out and tape it to your wall somewhere, so you don’t get complacent and forget it. It might just save a life.

In the meantime? We’ll do our part by continuing to call out these skeezy app makers and talking about this to everyone who will listen.

What’s your take on sites like Ask.fm, Snapchat, Kik Messenger and Privatext? And for the parents out there, we’d love to know how you talk to your kids about online safety.

Want to read more on this? Here are some great resources:

Ask.fm, The Troubling Secret Playground of Teens and Tweens

Kik: What it is and What Parents Need to Know