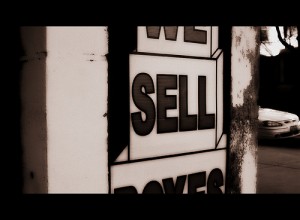 More and more data shows that social drives sales—and that’s especially the case for salespeople, according to a new report from Jim Keenan that shows salespeople who use social media outsell their peers (and, naturally, increase their profits).

Keenan’s firm recently released The Social Media and Sales Quota Survey. Among the featured stats, the report showed that, in 2012, 78.6% of sales people who used social media as a selling tool outperformed those who weren’t.

What’s more? Social sellers were 23% more successful in exceeding their sales quotas by more than 10% compared to their non-social peers, as pictured below. 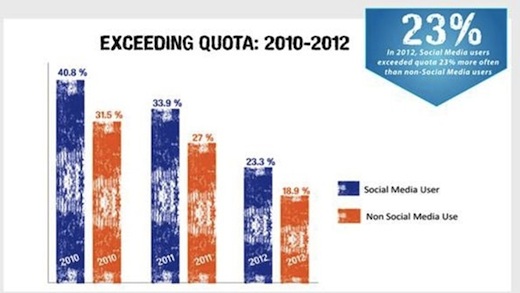 These two stats likely don’t come as a huge surprise. After all, companies in both the B2C and B2B spaces are seeing an increase in sales and profits as a result of smart social use, so it only makes sense that salespeople see the same sort of results.

One stat we found especially intriguing, however, relates to the length of time of social media use. Just over 50% of the salespeople surveyed by Keenan’s firm said they spend less than 10% of their selling time using social media. And as Mark Fidelman writes for Forbes, “That’s decent ROI.”

Curious about which social sites are at the top of the sales heap? Here’s the order, according to the report: LinkedIn, Twitter, Facebook, blogging and Google+.

That’s another stat that piqued our interest. We’ve long been big proponents of LinkedIn, especially for business development goals like selling, recruiting and new business development. And the fact that blogging comes in fourth? Well, it just adds more fuel to our fire about the power of corporate blogging—and how a thoughtful, well-planned content marketing strategy can help drive not just readership and web traffic, but sales and profit, too.

If you’re in sales (and, really, aren’t we all?), we suggest taking a look at Keenan’s report for a deeper dive into some relevant stats and info.

And in the meantime, we’d love to know your thoughts on the stats. Were you surprised by any of the findings? How has social media use impacted your sales?