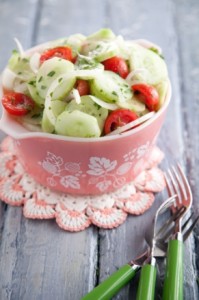 Creating the perfect Pinterest photo just got a little easier thanks to research that revealed the must-have elements. Surprised that there’s a science to Pinterest? There just might be—and the team at Curalate is leading the discovery mission.

Curalate has spent the past year amassing what Wired magazine described as “a database of millions of images shared on the picture-collection hub, plus information on how often those images were shared, liked or commented on.”

The team, which includes a computer vision PhD and a dedicated in-house data scientist, then combed through the database to identify characteristics of ideal Pinterest images—as well as one shining example of Pinterest imagery awesomeness.

The winner? It’s Paula Deen, y’all! Well, her Aunt Peggy’s Cucumber, Tomato and Onion Salad, anyway. What’s so special about this photo (aside from the fact that it does, indeed, look delicious)? According to Curalate’s research, the photo includes these elements that comprise the perfect Pinterest photo:

And there you have it—a recipe (pun intended) for Pinterest success. The next time you’re planning Pinterest images, it might not be a bad idea to incorporate some (or all) of the aforementioned elements, just to see what sort of response you get. In the case of Paula’s Aunt Peggy’s salad, the image has been repined 307,000 times, liked 8,000 times and commented on 300 times, according to Curalate CEO Apu Gupta.

Of course, as with any other element of social media marketing, let your own data and analytics guide your decisions, too. Maybe your Pinterest audience is made up of a bunch of rebels who prefer landscape-style photos to their portrait counterparts. That being said, a little experimentation never hurt anyone—and you might just stumble on a piece of content that particularly resonates with your followers.

What do you think of Curalate’s findings? Were you surprised by any of the results?