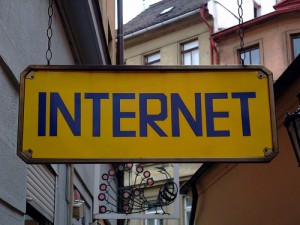 Keeping your arms around everything that’s going on with social media and in digital could be a full-time job. Thankfully, Mary Meeker has been putting out an epic deck for the last 2 years called “Internet Trends,” and she’s taken it on as her full-time job to summarize for the rest of us where digital and social are going.

Mary Meeker is an important name to know in the world of startups and digital: not only is she a partner at an influential venture capital firm, but she’s been involved since the days of funding Netscape, back in the dark ages of the early 90’s. Last year’s “Internet Trends” deck was quite accurate, so we expect her collaboration with Liang Wu to be on point for the upcoming year, as well.

We took the time to flip through this year’s 117-page deck and pull out the tidbits that we found the most interesting. We’ve got the highlights broken out below.

It’s been all about uploading photos to social for the last year and change—see Instagram, Snapchat, Flickr, Facebook photo albums, etc. Video uploads are a swiftly rising tide that cannot be ignored—see YouTube, Vine, Cinemagram and Dropcam. Sound is also a growing trend—SoundCloud and Tencent WeChat are two of the leaders that should be mentioned. But the really interesting trend to pay attention to is the way that data is being shared and examined.

Have you heard of Waze? It’s a mobile navigation application that crowdsources user data to provide its users with real-time traffic information. Think of all the ways data compilation and sharing is changing our lives. From traffic updates to changing the way we stay healthy—UP by Jawbone, FitBit, and the Nike+ Fuelband, the use of personal data to better understand your surroundings is going to be huge.

All of those products that help you to stay healthy listed above are a part of an emerging trend often referred to simply as “wearable tech.” That is, technology that you can wear. It’s been all about mobile technology and the smartphone, but now we’ll be seeing that technology turned into something you can wear. Google Glass and Apple’s rumoured smart watch will be just the beginning (Samsung is reportedly getting in on this game, too!). As mobile traffic on the web continues to explode (because people LOVE their smart phones), and as tablet traffic grows even more quickly, we’re likely teed up to see that same data be consumed via wearable technology.

Short-term sharing is a trend that has mostly been driven by a mobile app called Snapchat. Snapchat users send more than 150M images every day. And remember Poke? The Facebook copycat of Snapchat? They weren’t nuts to develop that app—Snapchat sees more uploads than Instagram.

Facebook is leading the pack, in terms of number of users, but Instagram, Google+ and Pinterest have all seen some big gains in the user department—and that’s not just those who are “on” the networks. That data comes from those who self-report which social media channels they actually use.

If you know of anyone thinking of stepping away from Facebook because of reports that “no one’s on Facebook anymore …” stop those people in their tracks. So far, mobile usage on Facebook is up so much that it’s making up for any decline of usage on the desktop.

The U.S. Shares Things Online … But Not That Much

In comparison to other countries, the US falls on the lower end of the range in terms of how often we share on social. Who reports that they share “everything” or “most things” online? Saudi Arabia, India, Indonesia, South Korea, Turkey, and China. Those areas of the world might become increasingly important to those who work in social. 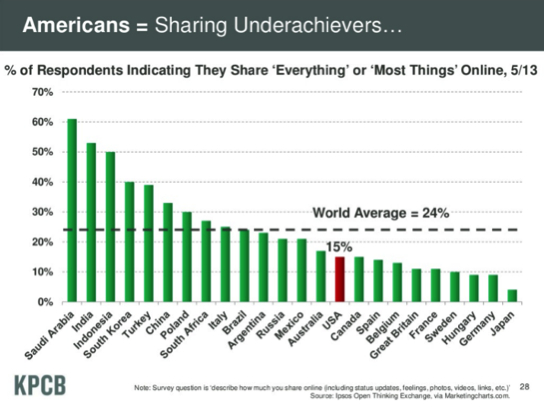 China’s mobile access to the internet has surpassed desktop access, and, if you think about it, this totally makes sense. It’s cheaper and easier to access the web via a mobile device than it is to make a larger investment in a more expensive laptop or desktop computer.

QR Code scanning in China is up 4 times year over year—this no doubt can be traced back to the popularity of accessing the web via mobile in China.  You can even follow the UK Embassy’s Weibo Account by scanning a QR code outside the Embassy’s building in Beijing.

China is also using social differently from the rest of the world because the services available there are a little different from others (you can’t access social channels like Facebook in China). Tencent has been around for 15+ years—that’s 6 years longer than Facebook, and they’ve got almost double the revenue. One of their services, Tencent WeChat, lets users connect to friends and family via voice, text and pictures. But WeChat also provides a way for users to scan merchant QR codes to opt-in to receive special promotions and coupons. This is a seemingly dead-simple way to link the in-store experience with the online and mobile experience.  Those merchants can then sell to consumers via WeChat, send offers and coupons and provide customer service all through WeChat.

Sina Weibo, another Chinese social media channel, has helped to drive government response to important public issues and provided users with a way to organize during emergencies. Users of the service generate photos, answer polls, talk to each other, repost information and make suggestions to collaborate and drive change.

Groupon’s Not Dead Yet … Maybe

This was a total surprise thrown into the beginning of the deck … Groupon’s reportedly not dead. Despite being the butt of jokes of consistently delivering disappointment on the stock market, “its first quarter revenues rose 7.5% to a better than expected $601 million.” And their transactions on mobile are up from less than 15% two years ago. They do 45% of their sales from mobile, anyway, but maybe they shouldn’t be written off entirely. We’ll have to wait and see if mobile turns Groupon into a comeback kid.

People are really into aggregating data about themselves. No surprise there that navel gazing remains a popular pastime, but wearable tech changes the game in terms of what you can do with that knowledge.

China is a force to be reckoned with based solely on the number of users that are on social networks, but those users are spending more time on the internet and on mobile than users in the US (who are watching more TV and listening to … the radio?).

It’s also clear from the section of the deck that examines immigration in the US and the spiking shortage of highly-skilled workers that we should all be sure our children are studying computer science and upping their game in the development department if we want them to be gainfully employed in the next 30 years. 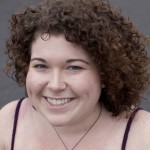 Jeannette Arrowood is a social media industry veteran who has worked as a Community Manager, Social Media Strategist and Digital Marketing Consultant. She loves the internet, hosting videos, content curation and trendspotting. She recently returned to Raleigh from Brooklyn and joined Expion as a Senior Account Manager. Over the years, Jeannette has worked with a number of large brands including Mondelez International, Kraft, MTV, AT&T, and Hilton, and she currently works with some of the world’s largest digital agencies to optimize their use of Expion’s social media management software.