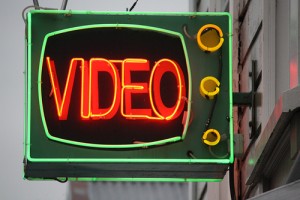 What do a goldsmith, a luxury cabin and an INC 500 company have in common? I’ll answer that after a few words (to set the stage).

We are at war.

I recently read a slide deck that revealed some powerful digital stats. Every minute:

Look at those stats another way, and they’re even more impressive:

That’s a lot of noise in the war for attention.

Sometimes, words are enough. Other times, it comes down to a powerful, provocative or disruptive image that shakes up old ideas.

From Tarantino’s Lips To My Ears

Recently I had to develop some message points and in each case, ended up resorting to the video medium to cut through the clutter we each face every minute of every day. It simply was, after review, the best medium given what I needed to achieve.

And while Spielberg stated, “I dream for a living,” it was Quentin Tarantino who said, “The good ideas will survive.”

And we’re in the business of not only having good ideas, but better ideas, more provocative concepts and bolder dreams to stir the reader’s imagination like a steaming hot cocoa on a cold winter night.

So A Priest, A Rabbi And A Hollywood Actor Walk Into A Bar….

Not really. But it’s the best bridge I had to get back to the three businesses (the ones I mentioned at the start of this blog) that couldn’t be more different:

Each had a problem to solve.

In the case of the goldsmith, it was conveying how his business differs from the numerous jewelry chains in the market place.

In the case of the luxury cabin rental, it was transporting the potential guest so they got to experience the sights and sounds of being there without leaving their desktop or mobile device.

And with the INC 500 company, they had become so engaged with their services and products that they sold that, as a result, they’d lost sight of what it was that they made possible with those products and services.

Want to know how they solved these dilemmas? Here are their solutions:

A 7,000-square-foot luxury cabin you have to see to believe:

An INC 500 company rediscovers its purpose:

You’ll see that each of these videos has a different feel, a different style and a different mode of attack on the viewer. Why? Because no two audiences are the same, which is why I say, “Cookie cutters are for baking, not branding.”

It’s also a matter of knowing what to say yes to, as well as what to say no to, as summarized by the late Steve Jobs, “People think focus means saying yes to the thing you’ve got to focus on. But that’s not what it means at all. It means saying no to the hundred other good ideas that there are. You have to pick carefully. I’m actually as proud of the things we haven’t done as the things I have done. Innovation is saying no to 1,000 things.”

So no matter the assignment, there’s always a more compelling way to convey a stronger message that moves people.

If words will do it, then weave a story that compels.

If an image does it, then create that visual.

If video does it, then get the footage in the can.

Let’s fill this world with some of our magic and marketing mojo.

After all, it’s not enough to have something to say. It requires that we have (and create) something that will be heard.

David Brier is a branding specialist, a rebranding ninja, a Fast Company expert blogger, a Slideshare rockstar with over 450,000 views and is the 1st place winner in the 2013 Shorty Awards for branding. He’s been written about in Forbes.com, INC and Fortune Small Business and was endorsed by Shark Tank investor Daymond John in the Shorty Awards nominations “because he is brilliant.” Follow him on Twitter and subscribe to his blog. You won’t be disappointed.