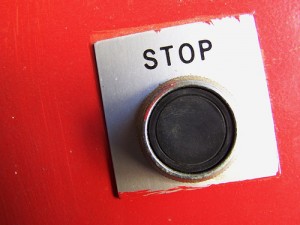 I don’t often break my rant pants out of the closet, but a recent proliferation of one-sided, irresponsible articles link bait has resulted in a desperate plea to all journalists and bloggers: stop writing crap!

Sure, anyone who publishes work wants to get traffic. And attention. And, to a degree, notoriety. But the way to achieve those goals is not by writing sensationalistic pieces that aren’t just misinformed—they’re downright irresponsible.

Take, for example, a recent piece I read on a heavily trafficked parenting site (and no, I’m not going to do the writer any favors by posting the link). The author (a father) wrote a heavily biased piece about the selfishness of married couples that choose not to have children, claiming this sort of misguided decision results in a number of horrible outcomes including the high probability that they’ll die alone.

Devil’s advocates, I hear you loud and clear. “This guy is a blogger, right? And he’s perfectly at liberty to express his own opinion.” Hey, I’m all about the First Amendment. And just because I absolutely, completely and wholeheartedly disagree with something doesn’t mean it should be published.

But this is one of those pieces that makes such a sweepingly inaccurate generalization that it makes me sad … and more than that, it pisses me off. And when you cite a number of links in an attempt to support your position, well, it makes me think that you’re trying to unearth a grain of credibility in an otherwise barren rationale. And the kicker? This post was inspired by a Newsweek article that claims those who are childless by choice “may spell disaster for the country as a whole.”

Case Study 2: Not A Tech Company? Get Off The Google+ Bandwagon

Another example? A recent article in a local business publication that featured a blatant proclamation about Google+: that is, that any company not in the tech space should steer clear.

This one bothered me (and totally hacked off my usually unruffle-able (it’s a word if I say it is) boss, Shelly Kramer) more than the aforementioned blog post because it’s a piece of journalism—and an inaccurate, one-sided piece at that. Talk about a sweeping generalization—only tech companies belong on Google+? Not hardly. There’s no question that people remain largely divided on the efficacy of Google+. But if your clients and customers (both current and prospective) are there, then it doesn’t matter what kind of company you are—you should be where your audience is. Not to mention that Google+ is packing an increasingly important SEO punch, and to ignore this particular platform altogether is to likely sacrifice some valuable online visibility that can help lead to more sales, more business and more revenue.

At the very least, I would hope an article like this included a viewpoint from another perspective. After all, there’s a high degree of probability that business owners will see this piece, included in a publication that they probably respect and trust, and think they should follow this advice to the T without further consideration or research. And, as a result, they risk missing out on some potentially valuable (and lucrative) opportunities.

Here’s the thing. I know journalists aren’t perfect. No one is. And there’s no denying that a large number of bloggers aren’t trained journalists—heck, a lot of them aren’t even professional writers. And on top of that, sensational pieces have been published long before the Internet arrived—it’s just that today’s technology makes a wider variety of content more accessible (and, in such a crowded marketplace, has increased the likelihood of writing and publishing link bait pieces that are purely designed to attract traffic and reaction—nothing more).

What I really wish, however, is that crap like this wasn’t published—and that if it is written, an editor puts the kibosh on something that’s purely intended to stir the pot. The way I see it, so much link bait is taking up space that should be occupied by thought-provoking pieces intended to inspire action or reflection, yet in a meaningful way.

Writing (and, more importantly, journalism) is a responsibility. And although the proliferation of self-publishing platforms has given anyone the ability to disseminate their thoughts, it’s still a responsibility that shouldn’t be taken lightly. These days, information is more powerful than ever. And if you’re going to abuse that power, you don’t deserve it.