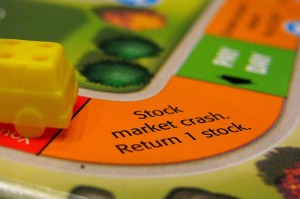 Twitter hackings and hoaxes are, sadly, nothing new. Yet yesterday’s hacking of the Associated Press’s Twitter account not only resulted in a fake tweet that claimed a White House terrorist attack had occurred; it also caused the Dow to plunge more than 150 points in mere minutes, which prompted widespread scrambling across the financial services industry.

The Back Story – How One Tweet [Briefly] Brought Down The Market

A good friend of mine works at a large financial services firm and we spent some time on the phone yesterday talking about it. I thought that what he had to say was pretty interesting—maybe you will, too.

“Most firms in trade securities are looking at the market minute-by-minute—and when big action happens like the Dow dropping 100 points in a minute, that’s a big, big thing—that’s a sign that something’s happened and we need to find out what it is immediately so we can react appropriately.”

Once other news outlets and the general public realized that the AP’s story wasn’t confirmed, the market recovered fairly quickly—within a span of about a half-hour. Several tweets from AP reporters and other AP networks warned of the hacking, too, which also helped the market return to pre-hoax levels.

In the wake of the hacking, the AP briefly suspended its Twitter accounts—as of early this morning, they were back up and running. 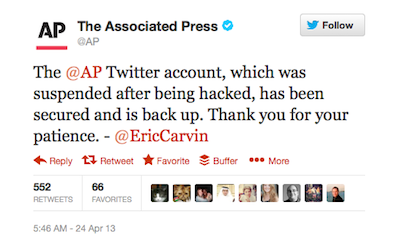 Additionally, reports began to circulate that Twitter is secretly working on two-step authentication, a security measure that Twitter users have increasingly demanded in the wake of high-profile hacks.

The Real Story: The Power of Social Media

“Here’s what amazes me about this whole thing,” I said last night to my friend. “That one tweet—a single tweet—could have that sort of impact on the stock market.”

My friend, on the other hand? Not so surprised, for two reasons.

“This happened at a significantly sensitive time—three months from now, if someone saw a similar tweet, I don’t think it would have had the same effect,” he says.

Secondly, there’s no denying that social media has changed the way we communicate, interact and, in many cases, do business—and, as such, content like tweets and Facebook posts now carry as much weight as other, more traditional forms of communication.

“Where do you typically find the fastest information?” my friend asked. “Twitter, probably, because you have people on the ground saying exactly what happened. And when it comes from a source like the AP, you still might consider your other sources but without question, the AP carries a lot of weight.”

In the financial services industry, information isn’t only power—it’s money.

And time? Well, that’s money, too. As my friend so succinctly put it, “If you have the best information first, you can take action and you can make money on Wall Street.”

He added, “Yesterday’s event was pure fear. If you look at liquidity in the market, there was plenty of it prior to the hoax. Once that tweet happened, there was no liquidity—no one was giving money anywhere. The market was completely dry, just like the day that Bear Stearns fell.”

Fortunately, the tweet was fake—and the market quickly recovered. Still, the way I see it, this whole episode is an undeniable sign that social networks have left an irrevocable mark on the world. And if that doesn’t make you think twice before you tweet, post or blog and/or realize the importance of social media channels and how they can impact your business, your career and your life, I’m not sure what will.