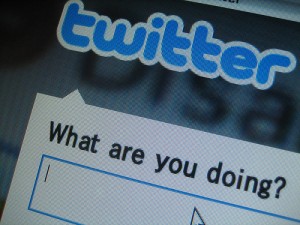 My friend, David Day, recently brought to my attention the Twitter account of Kansas State University’s President, Kirk Schultz, and a conversation about social media use by university personnel ensued.

You’d probably expect the president of a University to understand the power of social media channels on campus, but it’s a safe bet that many don’t, and that few senior leaders at the university level are actively engaging in social media channels in general. Or at least not in any meaningful way. Not so for K-State’s President, Kirk Schultz. 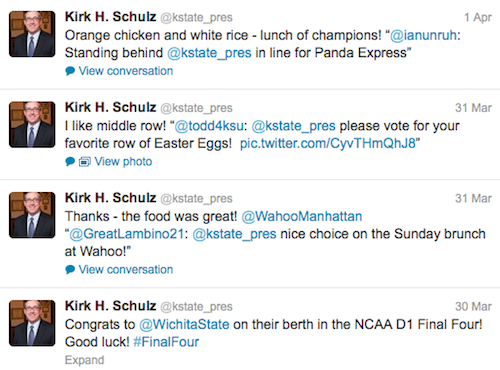 So kudos to Schultz for getting the power of social media when it comes to communication efforts. Although our conversation started with a look at Schultz’s Twitter account and the fact that he’s clearly a fan of Chinese food for lunch (as pictured above), being the intrepid internet stalker that I am, of course I didn’t stop there. I followed the link on Schultz’s Twitter profile to the KSU website, where I was impressed by the efforts of a team that clearly understands effective communication strategies.

The page devoted to the President and his message is written in a warm, engaging, down-to-earth style. It makes you quickly feel comfortable and at home, and that you’re dealing with (and talking with) a university president who actually cares what you might think, whether you’re a student, a parent or an alum. The site contains invitations to connect on Twitter, Facebook, YouTube and LinkedIn and features an invitation to email Schultz with your thoughts and concerns, which is also an effective list-building tactic for future use. 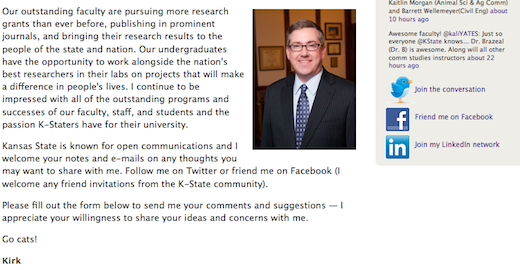 The University is doing a great job of integrating a variety of platforms into their marketing mix (fun contests on Foursquare, use of video and YouTube, nice use of Google+, to name a few) and it was fun to dive in for a few minutes and nod at all the things they’re doing right.

Our only advice to the @kstate_pres — be less selective on Twitter and follow more folks back than the measly 500 or so he’s selected. If you’re going to really effectively use Twitter, a one way broadcast channel (more followers/less followees) isn’t what’s going to work best.

But other than that, our kudos to the Prez. What about you? See anyone at the University level like Schultz who’s doing a bang up job with social? If so, we’d love to hear about it.