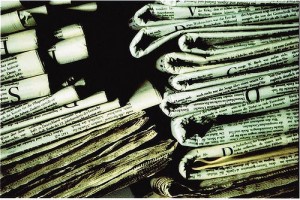 Today’s information landscape continues to evolve at a rapid pace. And although that statement likely doesn’t come as a surprise, what’s eye opening is just how much the media industry has changed in the last few years. The Pew Research Center’s State of the News Media 2013: An Annual Report on American Journalism isn’t merely a fascinating report—it’s a must read for anyone in the information business.

Although the report’s stats delve into various facets of the media industry, one dominant theme emerged throughout the findings: reporting power continues to shrink, resulting in a paradigm shift that’s impacted not just the inner workings of the industry, but also how people get their news and information.

Full disclosure? I have a magazine journalism degree from the University of Missouri-Columbia (Go Tigers!), not to mention more than a decade of print and digital experience under my belt. And although I’ve recognized that the media industry continues to undergo a drastic transformation, I remain staunchly in the “print will never die” camp (which, of course, is a topic for another post).

That being said, it’s downright irresponsible to not recognize the changes that have impacted news outlets, including newspaper, radio and television. Consider these findings from Pew’s report:

As Pew writes, “this adds up to a news industry that is more undermanned and unprepared to uncover stories, dig deep into emerging ones or to question information put into its hands.”

And, as a result, a vicious cycle has emerged. Media outlets no longer have the funding and resources to pursue in-depth stories and other content they would have easily produced a decade ago. Audience members have, in turn, deserted news outlets because they no longer provide the news and information they need, turning instead to other sources that deliver the resources they seek.

A New Generation of Newsmakers

Now that depleting resources and a virtual explosion of digital outlets has left media outlets struggling to keep pace with change, a new generation of newsmakers has emerged. Social media networks and other tools have given those with information the digital platforms they need to distribute and share their stories—no traditional media required.

Take, for example, the 2012 presidential election, which the Pew Center identifies as an event that solidified a critical shift: campaign reporters became megaphones, not investigators.

And in other examples, some companies have opted to circumvent media altogether. Consider Contently, which connects journalists with brands to help them create their own content. Sure, this sort of effort on behalf of politicians and corporations to get their messages into the media isn’t new—but, as Pew points out, what’s different now is that “news organizations are less equipped to question what is coming to them or to uncover the stories themselves, and interest groups are better equipped and have more technological tools than ever.”

If you’re in the content or information business, it’s worth your time to read Pew’s report. You may even see your own media consumption habits mirrored in the study’s findings. I still devour newspapers and magazines on a regular basis, but digital platforms like Twitter have certainly impacted the way I get information and hear about breaking news, after which I head to my trusted media outlets for the full story.

Although my inner optimist tends to be excited about what’s ahead, this report scares me a little, too. Journalists and the media have long been our sentinels, relentlessly pursuing the truth so that we all can stay informed and engaged. Now that the media industry has changed so rapidly, that sort of power seems vastly diminished—and it might not be something we can recover.

What’s your take on the state of the media industry? Do you see nothing but hardships and obstacles ahead? Or do you think media outlets still have some exciting digital opportunities to pursue as they shift their business models?