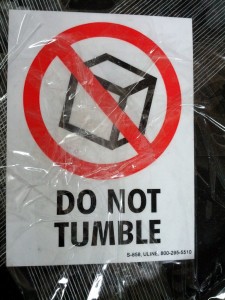 Have a Tumblr blog? That’s terrific. But for what it’s worth, I think it’s a bad idea to rely exclusively on Tumblr for your blog. And if you’re a business, it’s an even worse idea. Choosing Tumblr for your corporate blog just because you like the Tumblr platform is about like saying that because you prefer sending text messages over emailing that all your customers will just have to deal with it.

And that? That’s a poorly thought out marketing and communications strategy. It’s marketing based on your preferences and not on the preferences of your customers and prospects. And who is it that pays the bills? All the cool cats who love Tumblr or your clients?

Let’s back up. No matter how popular a platform is one day, there’s always a chance it’ll go belly up. Look at Posterous, once the darling of bloggers, including some pretty high profile people who proclaimed it was the latest, greatest and best thing ever. If you’ve been around the blogosphere for awhile, you’re probably nodding and thinking of Edelman’s Steve Rubel as you read that. Rubel was interviewed in 2009 about his bold move to convert his blog to Posterous. His explanation: “I fell in love with the flexibility of the Posterous platform. Specifically, I was enchanted by how well it works from a mobile device, syndicates out to other social networks and handles formats beyond text. It has rekindled my creative side as I dabble with new formats like mindmaps and more.”

And in some respects, Rubel was right. Posterous is cool and some of the functionality they built into the platform was pretty doggone awesome.  It’s easy to use, visually interesting and powerful when it comes to pushing your content out to other platforms. I have a Posterous blog that mostly houses some posts on personal topics and some of my favorite recipes, but for my company, our blog that’s powered by WordPress and integrated into our corporate website is our workhorse. For me, Posterous was a toy and something fun to play around with, but never something upon which to build one of my most precious business assets.

Well, as these things happen, Posterous was acquired by Twitter in March of last year and the writing was pretty much on the wall. And just this February, Posterous announced they were shutting down the service effective April 30, 2013. As you might imagine, there’s all kinds of scrambling around on the part of bloggers everywhere to figure out what the heck to do with their content.

I’m really not a curmudgeon when it comes to experimenting with new things, but I like to experiment in a way that’s as risk-free as possible. And when I do experiment, I tend not to do it in the way of sweeping proclamations and jumping in with both feet. I’m too old and too much of a skeptic to go that route. And most importantly, when I do experiment with new and different platforms, it’s not going to be with our corporate blog, which is our intellectual bread and butter. Our corporate blog is a marketing vehicle. It shows people how we think, what my team and I care about, what we think they should be paying attention to and adopting with regard to their businesses and endeavors and, most importantly, we strive to ensure that our blog delivers resources, information and value that we hope our readers find beneficial.

And that’s where my feelings about Tumblr come in. I love Tumblr. It’s an awesome platform with great content, a fabulous blogging community and is spot on easy to use. It’s surely been the darling of the Internet during the course of the past couple of years as its adoption has increased and traffic has skyrocketed. With some 97.5 million blogs and 44.6 billion posts, clearly a lot of people love—and use—Tumblr.

But here’s the rub. Maybe your clients or prospects are different than ours, but ours are either enterprise-level or mid-sized businesses in both the B2B and the B2C space. And I ask those clients all the time about where they get their information. And you know what? Not a one of them responds that they’re reading Tumblr blogs.

And that’s what really matters. If you’re blogging or experimenting with new online platforms purely for fun and because you love being an early adopter, that’s terrific. But if you’re using a platform for business purposes, it has to be because it makes sense to do so. In the last week, I discovered a local architecture firm that’s doing amazing things in the industry and when I liked what they were doing enough to check out their corporate blog, I was dismayed to find it’s a Tumblr blog. I wonder how many of their clients and prospects who discover their blog are interested enough in what they’re doing to (1) join Tumblr and (2) follow their blog. I could be wrong, but I’d guess that number is low.

Secondly, I discovered Andrew Teman via a job description that he posted, and which was subsequently shared on Facebook by a friend. It might just be the best damn job description I’ve ever seen. I liked Andrew so much that I dug around on his blog (which is on Tumblr) and fell a little in love with his brain and his personality. Please keep that on the DL, will you?

I liked Andrew so much I wanted to subscribe to his blog and get more of his gray matter goodness on a regular basis. But the thing is, when you’ve got a Tumblr blog, you set an instant barrier between you and someone who wants more of you. If your readers are not on Tumblr, they can’t follow your blog. So really, it’s all about the preferences of the writer and not about the preferences of something that’s pretty important—your readers and prospective readers (which is actually interchangeable with the words “prospective clients”).

I have a Tumblr account. I could easily follow both the architecture company’s blog and Andrew Teman’s blog if I wanted to. But the thing is, Tumblr isn’t on my daily radar screen. I don’t have time to hang out there all the time and while I realize I may be missing out, that’s just the way it is. My energies are focused elsewhere, so no matter how bright and shiny the Tumblr platform is, it’s just not on my list of things I can pay a great deal of attention to right now. And I’ll bet that your customers and prospects are not too unlike me—they only have so much bandwidth.

As a consumer, my needs are pretty simple. I need information to come to me in the way I want it delivered, and to the place I want it delivered. For me, that’s my email inbox. There’s no right or wrong answer to this, either. We like what we like and we want what works for us.

What do you think your customers and prospects want? Do you ever ask them? Do you think they’re like me, and have their own individual preferences when it comes to phone calls, text messages, emails and blog subscriptions? I’ll bet so.

And therein lies my problem with your Tumblr blog. I want to read it. I really do. But today, it’s not something I have time for, unless you make it easy for me. When I discover your blog and think you’re interesting enough or that what it is you’re sharing is important enough to what I do on a daily basis to subscribe, it’s a huge compliment. Great content is my brain candy. But if you don’t make it easy for me to feed your content to me the way I want it, I’ll just move on. I’ll be sad, to be sure. But I don’t have time to tailor my preferences to your personal preferences. And really? I shouldn’t have to.

Don’t get me wrong—I think Tumblr is a great platform and can serve many uses, for you and for your business. In fact, I think it’s smart to integrate Tumblr into your overall content marketing strategies (providing that at least some of your audience is there). However, for most businesses, I don’t believe that having Tumblr serve as your main source for corporate blog content is a sound strategy.

So that’s what I think. And this is your chance to tell me I’m smoking the crazy crack pipe and all that. And if you disagree, I would really like to hear about it. But to my way of thinking, if you are creating content that isn’t easily consumable by your clients and prospects, using sites that are easy for them to find, navigate and use, never mind shareable in ways that suit their individual preferences, you are looking at a world of missed opportunities. And perhaps business as well.