The interwebz are buzzing with news (and of course, the requisite griping) about Facebook’s new News Feed layout. Purportedly designed to create an even more visual, vibrant experience for Facebook users, Zuck says people are sharing more content than ever (such a surprise!) and, as a result, Facebook has become “the editor.” I’m not really sure I need Facebook as my editor, but that’s a post for another day.

If you can believe the Facebook hype, not only is the new News Feed more visual than the current iteration—it’s designed to create a more personalized experience for each user, an evolution that blends with other user-centric Facebook features like Graph Search. Facebook describes the new News Feed as “all about your friends. Each story has been reimagined to put the spotlight on what your friends are sharing.” 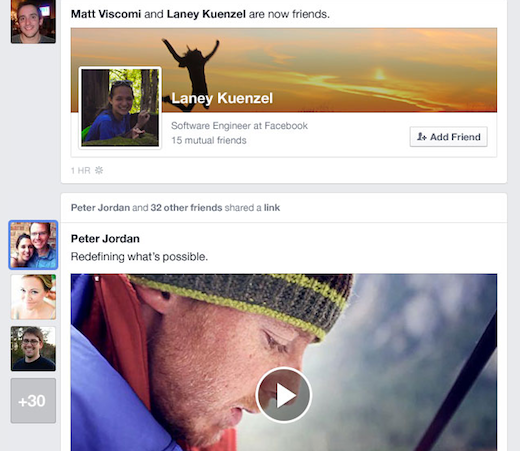 Plus, you’ll now have an ability to further customize your feed, giving you the information you want in several categories: Most Recent, Friends, Photos, Music, Following, Games or Groups.

I loathe making sweeping pronouncements about platforms or tools until we’ve had a chance to take them for a test drive, but these updates are impossible to ignore. At least they’re impossible for me and our team, but we’re geeks. We see a lot of complaints from Facebook users that their News Feeds are cluttered with information they don’t want, so perhaps the ability to create a more customized experience based more specifically on users’ interests might be a powerful change.

I don’t really imagine that people aren’t already spending tons of time on Facebook as it is (looking at self here, for sure). But it doesn’t take a mental genius to make the leap that if Facebook can continue to make changes that cause people to spend even more time there, well, there’s certainly a benefit there for Facebook. Not to mention for the slew of brands and advertisers forking over big bucks in an effort to nab their attention.

And in what we can only categorize as an “It’s about doggone time” move, instead of enjoying the new experience on your desktop and waiting for what feels like an eternity for a duplicate mobile format, Facebook has decided to simultaneously unveil the new look across all devices. Hallelujah!

Today’s announcement is the first major overhaul of Facebook’s News Feed since 2006—and if you’re clamoring for access to the new feature, you can sign up now for early access.

According to Facebook, some users will experience the new design as early as Thursday, with mobile platform launches occurring in the coming weeks. If this early sign-up process is anything like the one that followed the Graph Search announcement, we had access to Graph Search within a week or two of signing up—not too shabby.

Now that you’ve had a look at the redesigned News Feed, what’s your take?