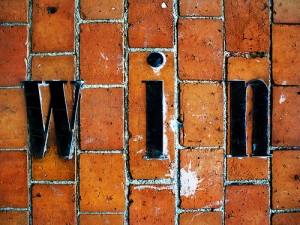 Contests can be an incredibly powerful way to energize your followers, gain new followers, build strong relationships, and promote your brand. Depending on your objectives, a well-executed contest can drive Facebook likes, Twitter activity, or links and traffic to your website (or a combination of the three).

In order for a contest to succeed, you need to carefully consider a few elements:

We recently ran a contest for a client as part of a web marketing campaign. Solo Foods, a Chicago company that makes pie filling, had several goals in mind:

In planning this contest, we had a few specific objectives:

The contest, the Sweetest 16 Recipe Bake-Off, was set up like the popular March Madness tournament, with a single-elimination bracket structure. With sixteen competitors, we had four rounds of voting in which the top recipes advanced until we had a winner, who received a cash prize. The inspiration for this contest was the popular Evil Baby Glare-Off.

Once the idea was cultivated, we began listing influential bloggers that we wanted to invite. This list came from industry experience, as well as following popular pins on Pinterest and links on Twitter. The food blogging community is tightly knit, and individuals link to each other frequently. By exploring these links we found popular bloggers we had never even heard of, enabling us to broaden our reach. We first reached out to bloggers with whom we had established relationships. Our final list had approximately 90 bloggers, prioritized by the size of their followings and the quality and frequency of their blog updates:

We designed an invitation letter using Mail Chimp, and imported each email and name. Take a look at the contest email invitation we sent out.

We monitored email activity with MailChimp Reports and had a 65 percent open rate, with a 70 percent response rate from those. With over 45 responses, we made some great connections. While some bloggers declined (some were already booked or didn’t participate in contests), it still led to several discussions asking about future collaboration. It took 10 days to fill the 16 spots in the contest.  Beyond that, we had an additional 12-15 bloggers that were interested in a relationship of some sort. This was one of the many positive side effects of the contest.

What We Sent Out

We wanted to be sure all competitors had the same products. Since Solo products are hard to find in some parts of the country, we mailed out care packages with four products in each: 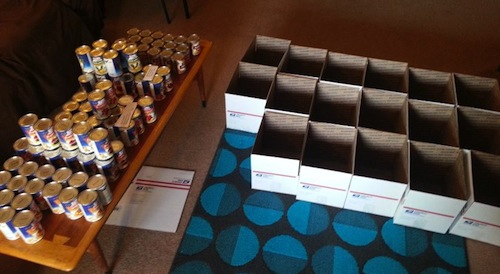 The bloggers all received 4 products, which allowed for some very diverse and creative submissions.

How We Set Up the Bracket

We set up the bracket like a traditional March Madness bracket, with the highest seed playing the lowest. We derived these seed numbers from each site’s domain authority, according to Open Site Explorer. Our hope was that the highest authority bloggers would end up in the final round and heavily link to Solo, providing us the most bang for our buck.

How We Set Up the Site

We created a WordPress site with categories and menu options to represent each round of the tournament. We used the plugin WP-Polls to record votes. You can see a sample match-up from the first round here:

We set up certain precautions against voter fraud including one-IP address per voting session, and restricted access from certain foreign countries.

How we encouraged competitors to get the word out

The competitors knew that this would be a vote-based competition, and we specifically chose bloggers that used Twitter and Facebook frequently. Once the official contest began, most bloggers posted their recipes to their personal blogs with links to The Sweetest 16 Contest. They posted the recipe, photos, and many “Go Vote for Me!” requests.

Competitors also took to Facebook to ask for votes. Most contestants posted statuses on their Facebook pages every round to keep the votes coming in. This kept involvement high for the full ten days. 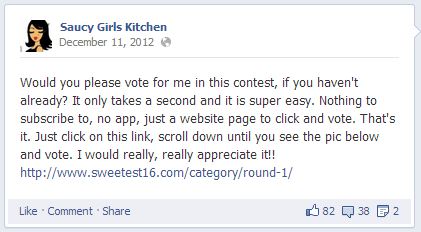 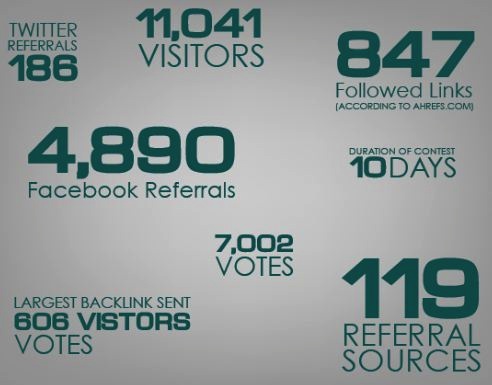 After the contest was over, we used 301 Redirects to send all links to a landing page on Solofoods.com. By doing this, we kept about 90% of the link value. Each recipe was entered into Solo’s website with optimized title tags and meta descriptions, linking back to the contributing blogger’s site.

To maximize the value of the contest, the recipes, and the relationships, we’re taking things one step further. We are in the process of creating a downloadable recipe book featuring all of these recipes and their creators. The book will be sold online, and all proceeds will support No Kid Hungry, a charity that (as the name suggests) aims to eliminate childhood hunger. In addition to helping a great cause, we’re introducing our client’s brand to No Kid Hungry’s 60,000+ Twitter followers, hopefully generating even more buzz, more links, more followers, and more sales of pie filling. 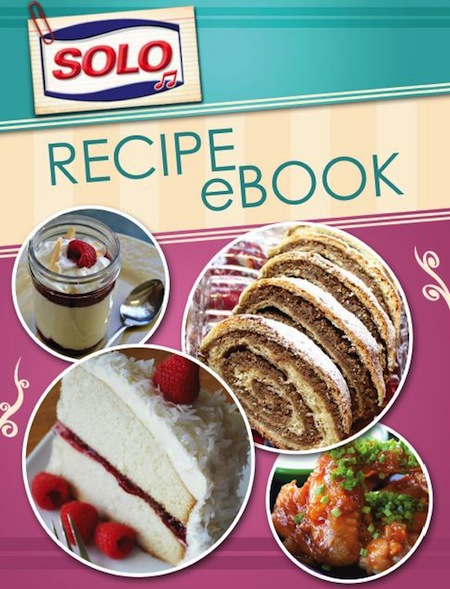 One of the biggest side effects was the positive feedback we got from exchanging emails. We made a point to respond to every email we received, whether they were interested in participating or not. I think it showcased the brand in a positive light, and we got many follow-up emails offering guest posts, future contest invitations, and more.

At the very least, we introduced our brand to a new set of bakers. We also received an automatic boost in Twitter followers and Facebook likes, mainly from the bloggers themselves. Lastly, we had one blogger ask Solo to sponsor her at BlogHer, which is a huge blogger conference every year. They decided against it, but it’s an opportunity they would not have had otherwise.

We learned a few things in the process of running this competition:

There are a few things we are still unsure of, or may do differently in future contests:

Depending on your objectives, you might be more interested in driving activity on Facebook. If so, Facebook apps such as Wildfire, ShortStack, and OfferPop are great tools for quickly launching robust contests. You could also launch Twitter contests where users participate by following you and tweeting a specific hashtag. Consult with a social media expert to determine which approach might have the greatest impact for your business.

Have you ever run a contest to boost an SEO or social campaign? How did you manage it? What did you learn from the process? Let us know in the comments! 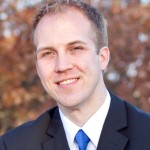 Kyle Claypool is the founder of Optima Worldwide, a Kansas City web marketing agency. I saw him write on this topic elsewhere and nagged him until he agreed to contribute to the V3 blog. I do so have a way with people. Kyle writes and speaks on the subject of SEO and he also represented the United States as the US Technical Expert at the WorldSkills Website Design competition in London in October 2011–which is pretty wicked cool. You can stalk Kyle online on Twitter at @kyleclaypool and @optimaww or you can find them on Facebook. Seriously, after reading this article, surely I don’t have to tell you that that’s a smart idea.