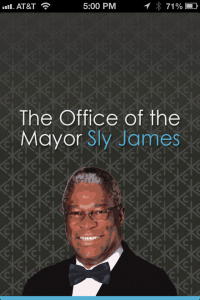 No matter what side of the political spectrum you’re on, you can’t help but admire Kansas City Mayor Sly James’ complete embrace of technology, including social media marketing. The tech savvy mayor tweets throughout the day, is no stranger to Facebook and he even blogs (albeit sporadically), too. It only makes sense, then, that the next step in the mayor’s digital strategy is providing an app for the convenience of Kansas City denizen who use their devices to browse for information on our fair city. And now, voila, you can download Sly James KC for iOS and Android.

The free app is more than a way for Kansas City residents and visitors to stay up-to-date with city news and other pertinent information. It’s also a way for our digitally savvy Mayor to be proactive when it comes to listening and participating in discussions taking place about issues important to our city, as well as engaging with Kansas Citians passionate about making our city a great place to live. I’m not a fan of developing apps for the coolness factor (which is the case with many on the market), but an app like this makes great sense.

The app includes links to the mayor’s blog, Facebook and Twitter profiles, as well as a calendar of upcoming events, the mayor’s YouTube channel and a newsletter. Plus, users can communicate directly with the mayor’s office by way of the app, by sending photos or submitting a contact form with more information about a question, comment or concern. 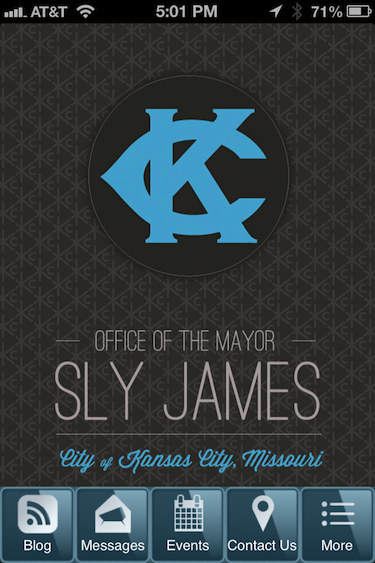 Sure, we might be a little biased; we’re not only proud Kansas Citians, we’re also fans of Mayor James. Yet bias aside, it’s great to see how the mayor has built his online brand and used the power of technology not as a way to simply broadcast his message, but to truly connect with the residents of Kansas City.

And a key component of what makes the newly launched app even more valuable, is that it’s a way to connect with those in the community who only access the web via their devices, who might otherwise have been overlooked. Isn’t that what social networking is really about: connection, bridging the communication divides imposed by socioeconomic brackets and fostering conversation and community?

Dubbed one of Newsweek’s Five Most Innovative Mayors in the U.S., it’s really no surprise that Mayor James continues to explore opportunities for the Kansas City metro, as well as his own staff and brand. This app is an ideal example, and we’re eager to see what the mayor introduces next.

It’ll be interesting to watch the evolution of cities that takes place in the coming year or so and see which other civic leaders join the digital bandwagon. Implementing a successful social media strategy isn’t easy—and it’s especially complicated if you’re a public official. Yet these platforms are ideal communication tools, and it only makes sense that elected officials use them to further strengthen their connections with constituents. It’s not necessarily about constantly campaigning—instead, it’s about showing people that you’re listening, you’re interested in connecting with them where they are and using methods that work across platform and across networks and that you not only care what they think, you seek their input as well. As Mayor James demonstrated, in Kansas City, there’s now an app for that.

What do you think of Mayor James’ app? Are the elected officials in your city using technology and social media? If so, in what ways? We’d love to hear about it.