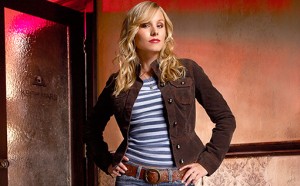 The interwebz lit up yesterday with news about the selection of Cardinal Jorge Bergoglio as the new pope (and the death of Google Reader), but over in a smaller corner of cyberspace, I’m watching another compelling story: the funding of The Veronica Mars Movie Project on Kickstarter.

So far, the project (which launched yesterday) has smashed previous Kickstarter fundraising records and has set a new record for the shortest amount of time to $1 million (less than 5 hours, if you’re interested). What’s more? Last night, they surpassed their $2 million goal less than 11 hours after launching, which means the movie is officially a go with 29 days left to fundraise!

Whether or not you’re a fan of Veronica Mars (if you’re not, well, what’s wrong with you?), this is an impressive project to watch. And if you’re considering using Kickstarter for your own fundraising efforts, there are a few things you can learn from the V Mars approach.

How To Kick Ass on Kickstarter

Kickstarter is like any other online platform—you don’t want to dive in without a plan. So before you send your project off for approval, give it some thought. What are you raising money for? Why will people care? What will you give them in exchange for donating? How will you promote it? The list of questions could go on and on, but you get my point. Kickstarter is a great way to raise money—but it also requires a ton of work, including promotion throughout your fundraising timeline, seeing your project to fruition (assuming you meet your goal) and fulfilling your backers’ rewards (again, assuming your goal is met). If you think Kickstarter is an easy button to financial success, well, think again.

Kickstarter gives you the option to include a video on your project page—and this is one feature you should definitely take advantage of before you begin. You may not have access to the star power included in the Veronica Mars promo video, but you can tell by watching it that those involved created this vignette to speak directly to the Kickstarter audience.

Regardless of the approach you take, make sure you share details about your project during your video. And it never hurts to reference your pledge rewards, too—the more you can sweeten the pot, the more likely you are to hit your goal.

And once your video is finished, don’t stop there. As your Kickstarter campaign continues, create short update videos that showcase other elements of your project and how the fundraising is progressing. Video is a powerful storytelling medium—and there’s no better time to tap into that power than when you’re raising cash.

As soon as I saw a tweet about The Veronica Mars Movie Project, I knew I’d donate—the only question? How much? And when I saw the extensive list of rewards, well, I had to mull my decision a little more carefully—and immediately wish for a money tree so I could donate $10k and land a walk-on role in the movie. (I mean, seriously—I was born ready for my close-up).

Movie projects (whether or not they’re high-profile) are typically rife with rewards like copies of the movie, scripts and other related merch. Yet no matter what type of Kickstarter project you’re launching, take a look at what you’re offering in exchange for donations. You don’t want to bankrupt your funds on pledge rewards—otherwise, what’s the point of raising money? You do, however, want to help encourage prospective backers to contribute. Take some time to think about what would get you to donate and use those ideas to guide your rewards structure.

If you take a look at the comment stream on the Veronica Mars project page, you’ll notice a lot of displeasure from international backers who don’t qualify for rewards due to international shipping costs. If you think your project may attract international attention, consider ways you might be able to reward those backers without breaking your budget. International shipping is expensive, so can you find some sort of digital alternative? And if you can’t, consider researching all of your shipping options—maybe you can find a cost-effective solution that fits your particular reward.

As you prepare to launch your Kickstarter project, keep the three aforementioned tips in mind. And before you think I’ve lost my mind, I’m not ignoring the giant elephant in the room. Yes, the Veronica Mars Project has a lot of star power behind it—not to mention a group of rabid passionate fans who have been waiting for this movie for six years. Yet studying success stories can teach us all a thing or two that we can apply to our own efforts, whatever they may be.

And to my fellow marshmallows out there, who wants to plan a watch party? I’ll bring the popcorn!