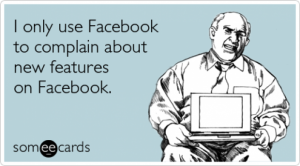 After several months of testing, Facebook has launched ranked comments and replies, two features that add more functionality to Facebook’s commenting system. Like Graph Search, the new features were also released with another goal in mind: to increase time spent on Facebook. (Seriously? As if we all needed another reason to spend more time on Facebook).

With comment replies, users can now reply directly to a particular comment in a conversation thread, rather than simply scrolling to the bottom and tagging a user in a response. Ranked comments allow for the most commented on or liked replies to float to the top of the thread, while spam comments move to the bottom (and thereby become less visible).

The features are available to Facebook pages as an opt-in until July. The feature will automatically activate on Facebook profiles with more than 10,000 followers.

If you want to go ahead and test out Facebook’s new comment replies, head to your Facebook page and click Edit Page > Manage Permissions. From there, scroll to the bottom of the gray box and click next to Allow Replies to Comments on my Page, then click Save Changes.

There isn’t currently an opt-in for ranked comments—instead, the most active replies and discussions will automatically move to the top of the comment thread.

One thing to note? Comment replies are limited to two branches, so you can’t reply to a reply.

You could also host an on-page Q&A, during which you bring in a special guest to answer questions on Facebook during a certain time period. This might be a great way to drive awareness and excitement leading up to an event or conference, for example.

Your strategy will, of course, be driven by your particular business and industry, as well as your Facebook audience. Yet there’s no harm in experimenting with new features to see if you stumble on something that sparks renewed engagement on your page.

After all, despite its seemingly constant stream of changes and frequently annoying behavior, Facebook is one big conversation—and now that you have the power to more directly participate in the dialogue with others, shouldn’t you take advantage of it?

What’s your take on Facebook ranked comments and replies? Have you opted to activate replies on your page? If so, what are you seeing so far?