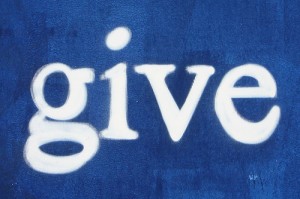 No matter what industry you’re in, the first part of a new year is typically a time for planning and strategizing–and nonprofits are no exception. Many nonprofits kick off 2013 with a new presidency and new goals, as well as new challenges. First thing’s first, says Matthew Mielcarek, Charity Dynamic’s VP of Consulting–retaining the influx of December donors, many of which are first-time donors. A benchmarking report conducted by Blackbaud shows that 70 percent of first-time donors will not give again. Mielcarek created this guide outlining five effective retention strategies to turn first-time givers into lifetime supporters.

Mielcarek says, “There’s not much of an investment argument here, as the value proposition for retaining donors is so much greater than finding new ones.” Demonstrating to a first-time giver the lifetime value of their support is an essential step in creating a long-term donor. Invest time in building a relationship with these supporters, teaching them your mission and sharing long-term goals so that they feel more invested in the organization through their donations and participation.

Pay Attention to the Donor’s Message

Paying attention to simple information can give you detailed insight into your donors’ minds. Just as you’d examine data and analytics to refine your digital marketing strategy, study the information you gather about your donors to know more about them and build a relationship. Where do they live? How much did they donate? How did the donor learn about the organization? The better you know your target audience, the better you can communicate with them.

A study conducted by Charity Dynamics and NTEN shows that 21 percent of donors say they were never thanked for their support. Demonstrating gratefulness is important to build trust and a sense of recognition among donors. Acknowledge their support and show them–specifically–how it’s helped your organization’s mission. Furthermore, go beyond a single thank you and be sure to thank a donor multiple times as your organizaton advances its efforts throughout the year. This makes a donor feel valuable and engages them for a period of time after their initial support. Also? People like to know where their money goes–and if you can show them how their gift has made a difference for your organization, they’ll be much more likely to donate at regular intervals.

Continue to Engage Your Donors

Building on continued thanks, ongoing engagement is important to fostering real connections with your supporters. This tailors outreach based on donor involvement and metrics. Custom messages increase the likelihood that a supporter will continue supporting an organization’s efforts. The Charity Dynamics/NTEN study shows that donors prefer using a charity’s website to gather information about an organization, followed by email and Facebook. Utilizing the most popular channels for supporter communications makes a message’s outreach more widespread and effective. After all, if you expect donors to give to your organization, the least you can do is deliver information that they want and need in the ways that they find most accessible and convenient.

Convert to the Next Stage of Giving

Once a relationship has been established with a supporter, it’s time to move toward a supporter’s next gift, whether that be via a recurring donation, a second charitable contribution, or a membership renewal. That doesn’t mean it’s time for an aggressive hard sell. Instead, use the aforementioned tips to get to know your donor, show them how their contribution matters and continue to make them an integral part of your organization’s mission. That way, you’ll have a much greater chance at converting a one-time donor to a long-term contributor.

Ashley Halligan is a managing editor at an Austin-based firm that provides free consultations to nonprofits seeking new technology for their organizations. Ashley has spent the past 6 years covering a broad range of topics including travel, music, food, wine – and now with Software Advice, nonprofit and sustainability trends. Her work has been published by VentureBeat, Austin Lifestyle Magazine, Environmental Design + Construction Magazine, Matter Network and the Marietta Times, among others.