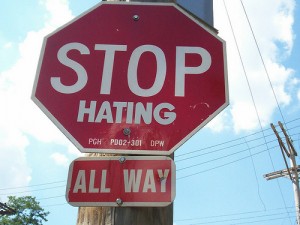 The story: street photographer Brandon Stanton, who runs the Humans of New York site, was approached by DKNY about purchasing some of his images for use in store windows all over the world.

According to Stanton’s blog post on the topic published this morning, he originally agreed to the DKNY rep’s offer of $15,000. Then, after talking with an industry friend, upped his asking price. He claims never to have heard from DKNY again with regard to the photos but was then alerted by a friend in Bangkok that his photos appeared in a window display there. The window display is in the image below:

The Gothamist reported on this earlier today and their post showed an original photo by Stanton paired with a snippet of an image from the window display in Bangkok. It would appear safe to say these images, or at least some of them, belong to Mr. Stanton. 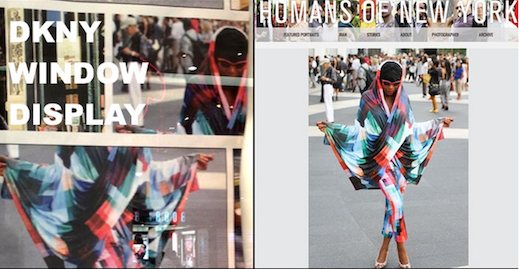 Personally, I don’t know anything about Brandon Stanton and have no way of knowing whether his allegation in this regard is true. What I can see, however, is that he’s a pretty awesome photographer and that he’s managed to build a Facebook community for HONY that’s some 561,000 friends strong. And that didn’t happen in the last day in the wake of this DKNY brouhaha.

His post about this on Facebook, as of this writing at 11:21 CST, has not surprisingly garnered some 23,000 likes, 26,000 shares and almost 3,000 comments. Heck, it might even be a trending topic on Twitter at this rate. But one thing that bothers me, both as an individual and as someone who spends a fair amount of time thinking about crisis communications as it relates to the social media space and also as an agency responsible for a fair amount of community management, is the speed at which this story is spinning and the hatred that’s being thrown at DKNY. After all, we don’t really have any proof of what happened, we just have one person’s word on this and his story. And I wonder when the veracity of an allegation in our society as a whole became irrelevant.

There are comments on Facebook about the DKNY Facebook community management team deleting posts at a fast and furious pace and my thoughts turn to what a nightmare having that job, at this very moment, might be like. I’m relatively certain that if it’s true that these photos were used without permission the person making that decision didn’t think to clue the community management team in on that. And they probably feel so completely and totally overwhelmed—and despised—right now.

In a recent discussion with some friends the other day about the Burger King/Jeep Twitter hackings, we came to a similar conclusion: the hatred and nastiness that’s invariably spewed as a result of various brand crises is disheartening.

On one hand, I can see why consumers and the public in general is upset and wants to fight the good fight for an alleged victim (sorry, we really don’t have all the facts in this instance, so with all due respect to HONY, let’s all be careful how quickly we jump on any bandwagon). But on the other hand, it makes my heart hurt a little to see the lashing out and the hatred.

The real measure, as people, as consumers, as brands, as community managers, is how we respond. At the very least, perhaps the DKNY team could or should post something along the lines of “We’re aware of what’s happening and appreciate your comments. We don’t have all the facts, but when we do, we’ll be responding here.”

But equally as important as asking for the facts is remember that we’re all just people. And piling on one another, be they brand or individual, says as much about us as it does about them. Or, like that old adage that we use with our children, two wrongs don’t make a right.

It’s entirely likely that Brandon’s work was swiped by DKNY and that stinks. He seems like a nice enough guy, and his request for a donation to the Bedford-Stuy YMCA to help city kids go to summer camp doesn’t seem unreasonable. In fact, if DKNY is guilty of using Brandon’s work without permission or compensation, that’s a pretty small price to pay.

It’ll be interesting to see how this plays out. Brands do bonehead things all the time, including unsavory things like stealing ideas and products and the like from people all the time. That’s nothing new. The added twist in today’s world is that when it happens, victims can take to the interwebs and make a big stink about it, which can do major damage.

If you were managing the DKNY brand at this very moment, what course of action would you take? I’d love to hear your thoughts.

UPDATE: DKNY has acknowledged the situation on both Twitter and Tumblr:

The Tumblr post, pictured below, goes into more detail regarding what appears to be an unintentional mix-up: 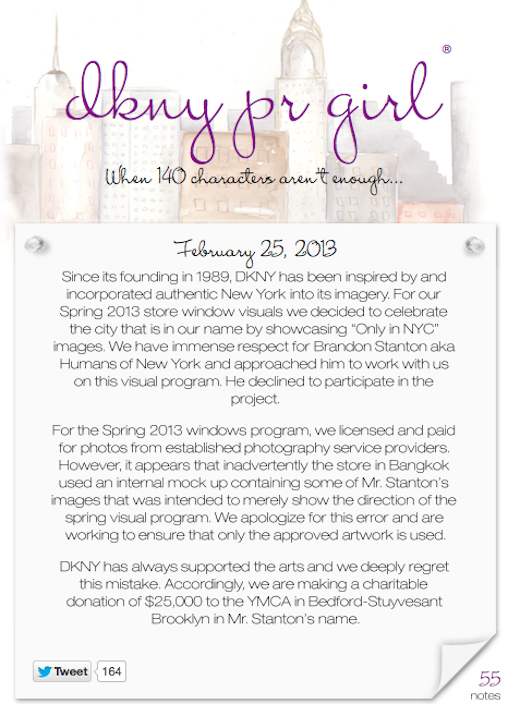 Kudos to DKNY for going beyond a mere blanket apology and instead giving people insight into what happened. What I find interesting (and, truthfully, a little odd) from a brand perspective is the fact that DKNY’s social media is handled by an anonymous NYC PR gal, as detailed in their Twitter bio: 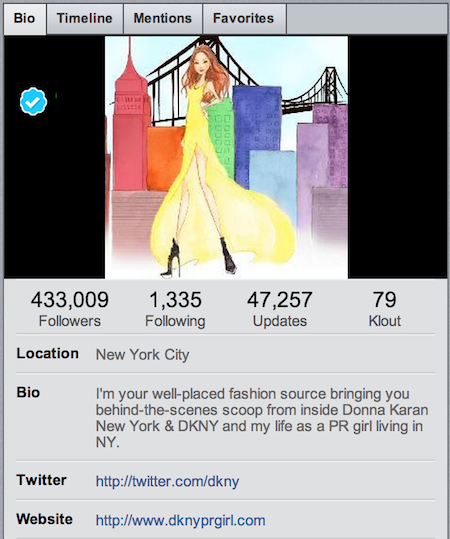 Sure, you could argue that there’s typically an intersection between fashion and PR, especially in major cities like NYC–and DKNY isn’t the only fashion brand to be managed from the perspective of a PR girl. That’s not to say that more and more brands don’t have visible and vocal faces connected to them that have gained nearly as much recognition and notoriety as the brand itself. Yet for the “face” of a major brand like DKNY to be an anonymous PR girl living in NYC, well, that surprises me.