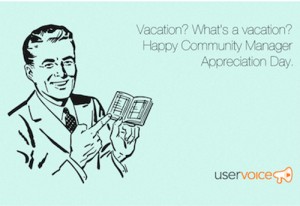 As part of the Community Manager Appreciation Day celebration, Social Fresh released its annual Community Manager Report, an infographic and white paper that compiles results of a survey distributed to community and social media managers.

And now that the survey and report is in its third year, the data has revealed several emerging trends—all of which, Social Fresh says, “look like good news for social media professionals.” With tools and technology evolving on such a rapid scale, it only makes sense that positions that are so closely intertwined with the digital landscape continue to evolve, too—and we expect to see continued growth not just in terms of the community manager position, but across digital marketing as a whole.

Here are a few stats included in the infographic that we found the most compelling:

Another interesting find? Community managers (and, heck, anyone who works in social media marketing, for that matter) tend to be stereotyped as young professionals in their early to mid-20s (for better or worse). SocialFresh’s data, however, points to an increasing average age, from 29 in 2011, to 30 in 2012, to 32 in 2013.

The white paper is still in development but we’ll post an update as soon as  it’s live. And if there are stats you’d like the Social Fresh team to explore in the white paper, be sure to leave them a comment.

Also, speaking of community management, I could not be more excited to give a shout out to my good friend Jeff Esposito, Public Relations and Social Media Manager at Vistaprint, recently named by Oracle/Vitrue as Community Manager of the Year. Here’s a glimpse of what’s involved in Jeff’s life as a community manager and the things he does and focuses on daily, most of which evolve around one simple concept:  how to get the most people involved with the company using social technology and social platforms. Community management may not seem like a big job to some, but it’s the front line for your brand, day in and day out, and the folks manning those channels deserve all the recognition they can get.

Congrats to Jeff and all the finalists on jobs well done!

What about you? Looking at the data and the infographic embedded here are you surprised by any of this year’s findings?