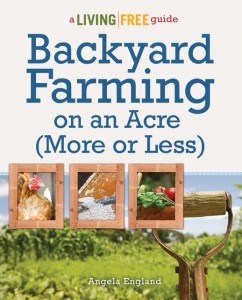 There are few things that make me happier than supporting my friends who are doing cool things–and Angela England is definitely on that list. A chance encounter at Blissdom has blossomed into a great friendship, and I’m so excited for Ang, who recently published her first print book: Backyard Farming on an Acre (More or Less). She took a few minutes from her busy book promoting schedule to chat with me about the experience–so without further ado, here’s an excerpt of our conversation!

We met at BlissDom Conference where we were both speaking. Tell me how you got involved in blogging and speaking?

I started writing online in 2006 when I wanted to do something from home to earn enough money to keep my kid out of daycare, without setting our family income back too drastically. Someone has to pay for my Dr Pepper habit, after all! I quickly figured out that all the content creation I was doing for other people, I would be better off doing for myself, so I transitioned into both problogging for other people, and blogging, freelance writing, and ebook creation for myself. Speaking at conferences came as a natural extension of teaching others the ins and outs of being in the online space, how to value their work appropriately, and how to engage businesses in a professional manner.

Now you have your first print book coming out. How has social media influenced both your traditionally published and self-published books?

My eBooks were greatly influenced by social media because as I became known for specific topics, people were starting to ask the same questions over and over. I quickly moved from answering individually, to creating blog posts, and then collections of posts in an eBook form so I could save time and spread my message further. Social media became my primary method of marketing the eBooks, as well as one of the best tools for topic selection I’ve found.

My journey into traditional media with Backyard Farming on an Acre (More or Less) was also influenced by social media. The agent who approached me about bringing me on as a client was referred to me by a friend I had met online! Those connections through community sites and networks can be so powerful and open doors you never anticipated.

What are some ways you used social media leading up to the launch of Backyard Farming on an Acre (More or Less)?

I created the Facebook page and secured the domain name for the book’s website as soon as the title was decided. In fact, I used the Facebook page as an outlet during the book’s creation and it really seemed to resonate with people. I found two main demographics following my page: the homesteaders and gardeners I had reached out to for quotes or photos, and the writers and bloggers who maybe had being published as a goal and were living vicariously through my journey. Both had amazing insights and were incredibly encouraging during the process.

I remember one time in particular I was trying to think of a clever title for a sidebar caption. I needed brainstorm power – people to bounce some ideas off of! When I jumped onto Facebook and talked it through, I received some great ideas, which led to the perfect solution of “Thorny Matters” for the caution sidebars. In many ways, by setting up the social media presence of the book right from the very start, it’s created a huge sense of anticipation and ownership in many of my friends instead of just having that feeling in myself.

Now I’m intrigued – tell me a little more about the book.

Backyard Farming on an Acre (More or Less) is all about increasing your self-sufficiency on a small scale. Most of us are never going to live on a thousand-acre ranch, but that doesn’t mean we can’t grow some of our own food, or support those locally to us who are doing so. The book begins by sharing some eye-opening statistics about how unsustainable our current food system really is in a long-term view. But the fix is pretty simple and there is a lot that individual households can do for themselves, which is what the primary focus of the book centers on – getting it done!

Where can people find out more?

Right now through December 18, I have tons of launch specials and giveaways going on related to the theme of the book and everything is at BackyardFarmingGuide.com. Free bonus material and downloads from the appendix pages in the book are also available there. If you want to know more about me, stop by my website at angengland.com. 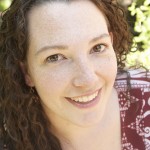 Angela England is a mother of five living in rural Oklahoma with her husband and five children and is the founder of Untrained Housewife. She is the author of Backyard Farming on an Acre (More or Less) (Alpha Books, 2013) and when she gets away from home, it’s usually to speak at a blog conference. She loves empowering others with whatever is the next step on their self-sufficiency journey but calls herself a get-it-done’ist, not a purist.