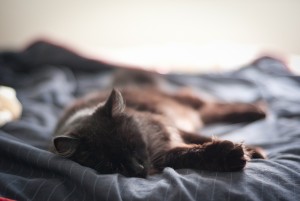 Have you ever come across a blog post or news story that instantly inspires you to write your own content based on the subject matter? That very thing happened to me yesterday afternoon—I was scrolling through Facebook (shocking, I know) and, when I stumbled across a story about the latest decision awaiting the Kansas State Board of Education, I was not only compelled to immediately comment—I knew I had to write something, too.

During a meeting today, the board will discuss whether or not cursive handwriting should remain a part of the educational curriculum. The story opens like this: “Should children born into a world of computers, iPads, smartphones and e-cards have to learn old-fashioned cursive handwriting?”

As someone who still writes in cursive, my immediate inclination is, “Of course!” But as I thought more about this issue (and composed my comment on the Kansas City Star’s Facebook page), I realized there’s a much bigger issue at stake. Is technology making us lazy?

Case in point: “Today’s children type, text and e-mail more frequently than they write longhand,” writes Suzanne Perez Tobias for The Wichita Eagle. And because of this shift in skills, more parents are concerned about their kids being properly prepped to use technology, rather than focusing on longtime curriculum components like penmanship.

Technology most certainly shouldn’t be ignored—and in fact, I’m a big fan of students learning computer and other related skills so that they’re poised for success in an increasingly digital world.

That being said, I think eliminating areas of study like cursive handwriting creates a slippery slope. If, for example, cursive handwriting is removed from schools because the thought is that kids use technological devices more frequently than they do handwritten forms of correspondence, does that mean that we’ll eventually reach a time when handwriting will cease to be taught all together? Becoming overly reliant on one form of communication, or even one way of doing things, seems dangerous. After all, technology certainly isn’t foolproof—and putting all of our eggs in the technology basket seems unnecessarily risky.

I turned 30 in August and I still lament the over-reliance on calculators experienced during my math classes. Even though I struggled mightily with subjects like math and science, my numerical skills (or lack thereof) weren’t helped by the fact that we could turn to our cutting-edge TI-82 calculators to not only solve basic problems, but more complex equations, too. Would it have been so horrible to focus on how to solve these problems without a machine?

I’m not in a position to influence school board decisions, but as curriculums continue to evolve, I’d hope that stakeholders keep one key term in mind: balance. Sure, it’s smart to look to the future and prepare students for what’s ahead. But that doesn’t mean that we have to completely abandon the skills of yesterday, either.

Now that I’ve spouted off, I’d love for you to weigh in. Do you think the Kansas State Board of Education should vote to keep cursive handwriting as part of the statewide curriculum? And do you worry that technology is making us lazy, or do you think the prevalence of digital devices and communication is unveiling a whole new set of skills and intelligence?

Image by 3dpete via Creative Commons