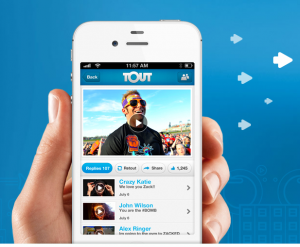 Tout launched in 2011 as an iOS and Android video app with little fanfare. Over the last year, however, Tout has become a fast-growing player in the instant video space. And you know how we love video.

The site touts (snicker) itself as a social media platform that allows users to shoot 15-second video status updates via smartphones and webcams. Touts are then shared in real time and automatically to Tout.com, Twitter, Facebook, Pinterest, SMS and email contacts. And through Tout’s reply feature, users can engage in Tout conversations with other users.

Tout’s sort of like a video version of Twitter—think short, snappy bursts of communication as opposed to lengthier pieces. And as rich media like video becomes an increasingly powerful form of communication, sites like Tout have the potential not only for some serious staying power, but also to take a bite out of platforms like YouTube thanks to a greater feeling of immediacy and intimacy. Another sign that Tout just might be a lasting force? Businesses are paying attention.

Tout got a huge visibility boost thanks to a partnership with the WWE. During an episode of Monday Night Raw back in July, the WWE featured fan-submitted videos. And in that one two-hour episode, Tout’s iOS and Android apps were downloaded more than 30,000 times. More than 400,000 people visited the app through Tout.com, mobile devices and WWE.com. Lastly, more than a million Tout posts were viewed during and after the show, while more than 12,000 updates and replies were posted by users. Oh, and they picked up the WWE as an investor, too. Jackpot!

In August, the Wall Street Journal introduced their innovative approach to ‘smartphone reporting’ with the WSJ WorldStream, a “near real-time” hub for mobile video shot via smartphone by the Journal’s award-winning team of more than 2,000 journalists around the world. The platform launched in conjunction with the Republican National Convention in Tampa, Fla., in August. And you guessed it: Tout is what powers the back-end processing and publishing of clips. As you’ll see on WorldStream, uploaded videos can be as long as 45 seconds because WorldStream is a proprietary Tout app that gives the media outlet more legroom.

Video is powerful—not only is it a more personal, entertaining way to share your information or tell a story, it’s also a form of rich media that consistently sparks increased viewer engagement. And if you’re camera-shy or unsure of how video connects with your particular digital marketing strategy, experimenting with a site like Tout can be a great way to test the waters. Try filming a few short clips and embedding them into blog posts, sharing them on your Facebook, Twitter or Google+ pages and see what sort of audience interaction you get. Our guess? You’ll soon have a hard time tearing yourself away from the camera!

Have you taken Tout for a test drive? If not, does this make you want to? Let’s hear it.