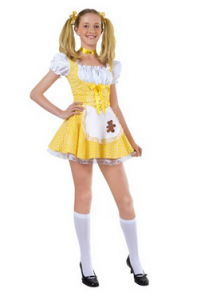 With six year-old twins, I’ll admit to spending a bunch of time lately thinking about it. Oh, and the fact that I’m a teensy bit of a fan of building up girls and their confidence and self esteem and focused on ways to empower them. Yeah, there’s that. So I’ll admit, right up front, to a bias on this topic. Back to costumes. Who decided sexy was the direction we need to go when it comes to Halloween costumes? 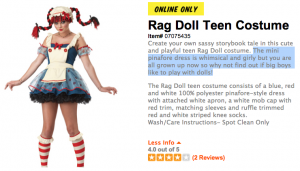 Yet another awesome costume idea! Thanks Spirit Halloween!

Great, just what I need, my six year old looking like a hooker. Super.

This image was courtesy of Miss Representation’s campaign focused on the search for empowering costumes for girls. And I am so very much a fan of that.

So while I’m already thinking on and stewing about this, I saw my friend Tom Webster’s post on this very topic on Facebook this morning. It was an observation about costumes and college kids in his neighborhood and it confirmed what I pretty much already knew–slutty Halloween costumes are de rigeuer. With both little girls and big girls. 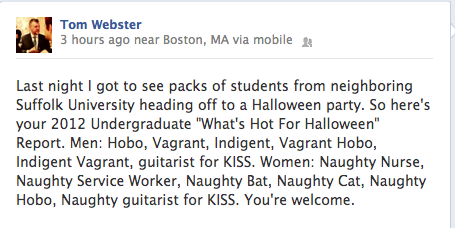 Confession: I hate Halloween. At least celebrating Halloween (as an adult), by dressing up. So, naturally, I don’t do it. But one year, many years ago, I gave into peer pressure and agreed to go to a party in costume. And completely and totally lacking any creative ideas, I resorted to renting a costume. You know what it was? A saucy French maid costume. I was probably all of 26. I’m pretty sure I thought it made me look sexy, which apparently what I thought Halloween was all about. Or at least what I wanted to show up at that party looking like. Totally skeeves me out just thinking about it.

But now the very fact that I once thought like that gives me pause. Especially as a woman of four daughters. When it comes to Halloween, do we really want to be naughty nurses, sexy Rag Doll teens or French maids with our bewbs (or our butts) hanging out? Do we want our daughters to dress that way? Is sexy what we’re going for when we look for a costume? And is our goal to tart ourselves up? These are all just rhetorical questions because there’s not one right answer. Just the answer that’s right for you. I recognize more than anyone that my thoughts are just that–mine. If dressing up in a sexy costume is your gig, power to you. But for me, it just seems like a huge giant step in the wrong direction.

And the whole point of this post?  Believe it or not, it’s one MILLION percent possible to be something for Halloween without being naked. Really!!! Just watch this, then come back after the jump so that I can give credit where credit is due.

You loved it, didn’t you? I saw this little bit of fabulousity the other day courtesy of my friend, Kelly Yale, the force behind Modern Parent, an online magazine for parents,

And then I fell in love with Emotistyle, a couple of YouTubeLadies. Yes, people can get famous when they do awesome YouTube videos – and Emotistyle’s Molly Austin and Shamikah Martinez, we’ll they’re famous and awesome. These girls are self-described as fashionistas with too many feelings. They are comediennes–living the dream in New York City and sharing a love of fashion, comedy and spicy Asian food. Oh and video. And, as luck would have it, they’re experts at helping people deal with their feelings—and looking good in the process. Seriously. Who doesn’t need this? 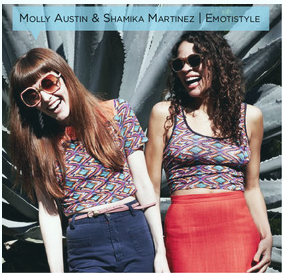 The next logical thing to do? Find the Emotistyle girls on Facebook, stalk them on Twitter, and for all that’s holy, share this awesometastical video with the women, young and not so young, in your lives and remember, smart-y beats tart-y, every day.

Tagged:best Halloween costumes for womenHalloweenhow to dress for Halloween and not look like a hookerwomen and Halloween