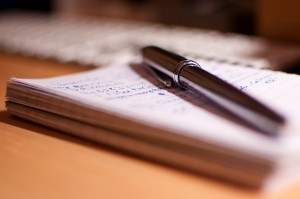 Anyone who writes knows there’s not much worse than writer’s block. And how to solve writer’s block is something that many a writer wrestles with. At times, it seems like more than a mere block, instead resembling a temporary paralysis that seizes every creative fiber in your brain. And no matter how much you struggle to write, the page remains resolutely blank while you contemplate tearing your hair out—or perhaps a career change.

There are a number of solutions for writer’s block—and you’ve probably found something that works for you. Some people take a walk, some people switch to another task, some people push themselves to write whatever they’re thinking (and edit later).

I’ve found one particularly useful solution—and since I’m an incredibly nice person (contrary to what Shelly Kramer will tell you), I wanted to share my hard-earned wisdom. The secret? Conversation.

Take a recent bout of writer’s block that happened to me. I struggled to write a blog post for a client. In the scheme of relevant topics, this was an easy one. But for whatever reason, the words didn’t flow—in fact, they were stopped altogether. I did what I usually do—close the document, work on something else, then return to the post later. After two days passed, however, I realized this particular strain of writer’s block wasn’t going anywhere anytime soon.

On day #2 of writer’s block, Shelly called–stalking me incessantly as she’s wont to do. I’ll let you in on a secret. Anyone who knows her knows she hates to talk on the phone unless she’s in her car on her way to a meeting. Then, she gets bored, so she stalks people. Errr, I mean calls them. And me? I’m at the top of the list of favorite stalkerai. I love being special!

She asked me what was going on and I mentioned I was in the throes of a wicked case of writer’s block. She asked what I was working on and I unloaded. And guess what? That tiny bit of conversation solved the problem. She immediately suggested a completely different approach to the material that included crowdsourcing input from a handful of the client’s employees, then using that information to drive the direction of the post. Not only would it get more people personally invested in the content, but it would make the post itself more relevant and entertaining, too—talk about a win-win situation!

That’s exactly what I did—and with that 2-minute conversation, the writer’s block completely disappeared. It’s amazing what happens when you seek new perspective on a project or idea—and why you shouldn’t hesitate to have a quick pow-wow with a coworker, boss or friend when you’re feeling stuck.

In the past, I’ve been particularly guilty of feeling that asking for help or saying “I can’t do this” is a sign of weakness—when in fact, one of the most valuable lessons I’ve learned so far is that embracing your shortcomings is actually a sign of strength. My recent bout of writer’s block is a prime example. I could have wrestled with the post for another day and produced something that very likely would have been dry and mediocre. Instead, I had a brief conversation that produced new inspiration, not to mention a much better piece of content.

The lesson? If you have writer’s block, talk it out! It’s highly likely you’ll soon see the assignment in a new light, and, bam—you’ll be off and writing in no time.

Fellow writers, I want to hear from you. How do you banish writer’s block? (See what I did there? The whole crowdsourcing and conversation thing? Works every time!)

Image by humbert15 via Creative Commons