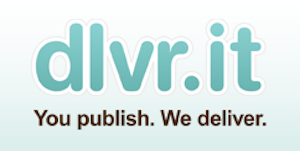 We love free resources that help distribute blog content to our social media audience. And while we aren’t fans of full automation, there are certainly reasons to support why some automation helps reduce time spent distributing content to your networks and audience. After all, the hardest part of the content marketing equation isn’t writing content–it’s effectively sharing and distributing that content to an online audience–and the bigger the audience, the better in terms of visibility, reach and engagement.

We’ve been testing and using Dlvr.it for several months–and so far, we’ve found that this free tool is great for helping to push content (either yours or someone else’s) to various routes (aka destinations) such as Twitter, LinkedIn, Facebook and more.

How To Set Up Dlvr.it

Setting up Dlvr.it is easy; all you need to get started is an RSS feed of the content you want to share (and a free Dlvr.it account, of course).

Once you’re logged into Dlvr.it, the first thing you want to do is to set up your route(s). For the purposes of this how-to tutorial we’re going to work with Twitter only.

Set up your route by selecting the large blue-green button that reads “add route” at the top of the left hand side of the screen.

A new box will appear asking you to set up the following:

You can add as many sources for content as you’d like within a route and all sources you add under a specified route will go to the same destination. Tip: If you want different sources to go to different destinations set up multiple routes.

When adding a source to Dlvr.it, you’ll see a box with seven tabs. We’ll walk through each of these tabs in this tutorial. The tabs include: 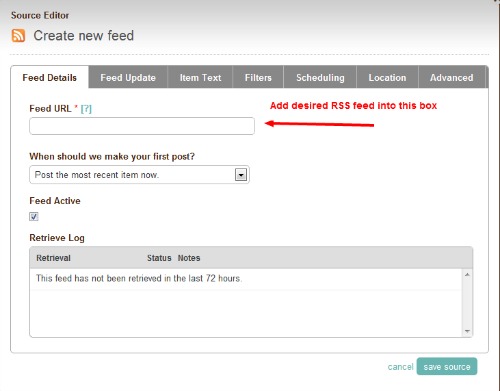 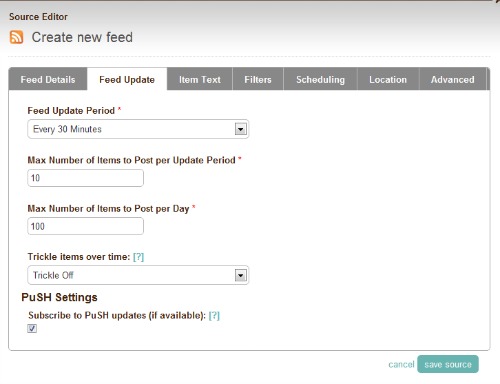 In the screenshot below you’ll see the tab defaults. Change the following areas however you’d like. If you need ideas, we’ve got details on various configuration options. 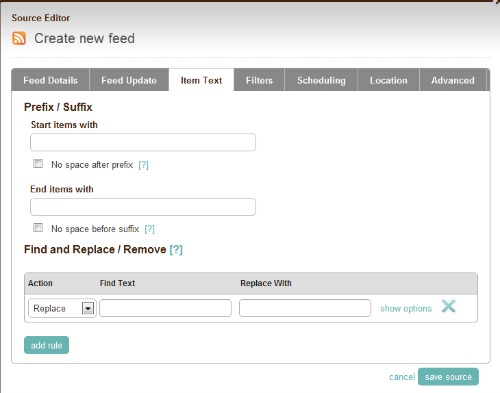 This is where you can get creative with the use of hashtags and source listings. We’ve got a few ideas of terms you can add–just keep in mind the only limitations are the number of characters allowed by Dlvr.it. 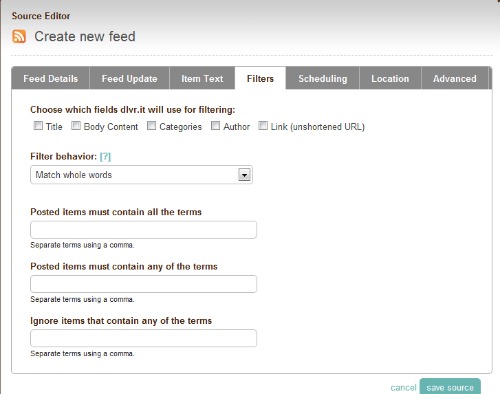 This is another area in which you can get creative with content you include (or exclude) from a specific source. Let’s say your source is a popular tech blog that does reviews and you’re a devoted iPhone user who never wants to auto-publish any content that’s Android-related. Use the Filters tab to set the parameters identifying which words Dlvr.it should search for–and under “Ignore Items that Contain any of the Terms” you could enter “Droid, Android”. 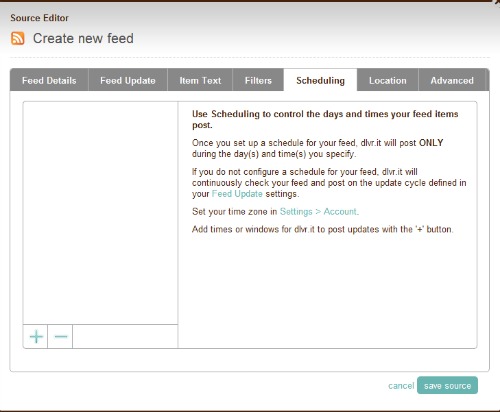 Only want to post content from your source on specific days of the week? Easy! Be sure you change your timezone under Account Settings before setting up any schedules.

Use of this feature is best explained using the information directly from Dlvr.it’s setup screen. Once you set up a schedule for your feed, Dlvr.it will post ONLY during the day(s) and time(s) you specify.

If you do not configure a schedule for your feed, Dlvr.it will continuously check your feed and post on the update cycle defined in your Feed Update settings.

This feature is only applicable to those of you who utilize the share location option offered by Twitter. From Dlvr.it’s help screen:

Dlvr.it will pass your feed location info, if available, to Twitter when we post. You’ll need to turn on location in your Twitter account – log into http://twitter.com, and under Settings, make sure the Add a location to your tweets option is checked.

For most users, using Dlvr.it’s defaults is fine. That being said, it’s a good idea to give this tab a good overview in the event you’d like to tweak these settings.

After that? You’re finished! Go ahead and hit Save Source.

Repeat all steps above for each source you want to add to your route. You can have as many sources as you want.

And there you have it–Dlvr.it 101! We did the leg work so you don’t have to–and now you love us even more, right?

If you’re already a Dlvr.it user, we’d love to hear from you. Which features do you like best? What features would make it even better?