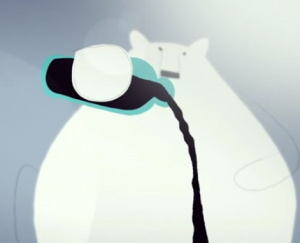 The ad world is all a-twitter about Alex Bogusky’s latest career path, which seems to be hyper-focused on activism.

Working for the Center for Science in the Public Interest, a Washington-based advocacy group, Bogusky partnered with singer Jazon Mraz and produced an animated video, The Unhappy Truth About Soda, extolling the dangers of sugar, specifically as they relate to the massive amounts of sugary drinks consumed daily in our society.

The uproar is focused on the fact that for many years Bogusky (like many in the ad biz) has been the brilliance behind campaigns for the likes of clients like Burger King, Coca-Cola and the like. He’s worked to create campaigns and ads that quite likely compelled consumers to eat and drink crap. And there’s much of talk of hypocrisy and biting the veritable hands that fed Bogusky well for many years.

I’d love to hear your thoughts on this. Me? I watched the video and wanted to applaud. I don’t drink soda, I don’t let my kids drink soda and applaud any effort that undertakes to educate the public about the dangers associated with swilling the junk.

Here it is, you can watch it yourself:

This reminds me of a conversation I recently had with one of my six-year-olds as we drove through San Francisco. She watched someone standing at a bus stop inhale, then exhale smoke, and shook her head. Then she said “Mommy, why would anybody ever smoke?” Try explaining to a six-year-old that there was once a day when doctors told people to smoke. And claimed that it was good for you. And that everybody smoked. Because it was just what you did. And that people didn’t know any better. And now, many of them are dead as a result. Try explaining to a six-year-old why you smoked. Seriously not fun.

Smoking stinks. Literally and figuratively. And we, as a society, now know that it can kill us. Because of education. Because of activism. Because of whistleblowers and lawsuits and commercials on TV that scare the crap out of us.

And you know what? To my way of thinking, soda and sugary drinks are no better than cigarettes. They are NOT good for you. And we have an obese adult population who doesn’t yet seem to realize that, raising kids who can’t possibly be expected to know better. And like cigarettes, the problems sugary drinks cause are often life-threatening. Says the daughter of a diabetic and the wife of an overweight man.

I’m not necessarily a fan of laws like the one recently enacted in New York City banning sugary drinks in some establishments and setting size limitations in others – legislating this kind of thing makes me nervous. But I am a huge fan of campaigns that seek to educate consumers about the dangers associated with sugary drinks.

And who cares if Bogusky changed his mind? I have many friends who went down the agency path and subsequently worked on all kinds of accounts that caused them to ask themselves moral and ethical questions. And sometimes, some of those people opted out of working on accounts that they felt compromised their personal beliefs. And others considered it all part of the job. Who am I to judge what’s right for anyone else? And likewise, who is anyone in Ad Land to judge what’s right for Bogusky in this chapter of his life?

What do you think? Is it reprehensible that someone (Alex Bogusky or anyone else) one day applies his or her talents to the success of something and later opts to apply those same talents to educate people of the dangers associated therewith? I think it’s safe to say that you can count me in the group of people applauding Bogusky for his stance here. Who knows, it might even save some lives along the way.

By the way, if you watch The Real Bears video, do someone you love who drinks soda a favor—share it. I’m guessing that the 6,690 views it’s garnered so far will soon skyrocket into the millions. Or at least I’m hoping it does.

And if you’re interested in voting in AdAge’s poll on whether Bogusky is good or evil, you can vote here, results to be published next week.