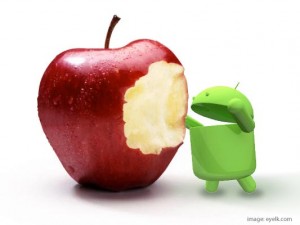 Does anyone else NOT want the Olympics to end?! Welcome to this week’s Best of the Web. What is the one thing you’ve found yourself watching during the Olympics that you never thought you would have? For me, it’s handball! That sport is intense. Oh, and it was a big week tech-wise, too. Comscore released its quarterly mobile market report, Twitter announced platform changes and more (much, much more)! As a reminder, we typically cover items in five categories: Integrated Marketing, Social, SEO, Mobile + Video, Awesomeness and Ridicularity. <Judge voice> Set…. </judge voice> (gun shot sound) Go!

Happiest Olympic Worker Ever for the 2012 Olympics

This. Is. Brilliant. A bystander caught 23-year-old Rachel Onasanwo’s hilarious monologue on video and uploaded it to YouTube. Since the upload, it’s received over 1.4 million views. High atop a podium armed with a megaphone, she employed a perfectly sarcastic tone to encourage her lackluster group to get pumped for the 2012 events.

Apparently (thanks, Billboard.com), Gangnam is a glitzy, affluent area of South Korea’s capital, Seoul. So, what Korean rapper Psy is boasting about in this video is essentially the same as American performers paying tribute to Beverly Hills or New York. Bet you can’t watch this without trying some of the dance moves.

Google has made a huge acquisition with Wildfire, a marketing start-up that, simply put, uses social media to connect brands to consumers. The platform enables brands to manage their pages, tweets, videos, ads and promotions in one central location. But here’s why it’s big: Wildfire is making huge strides in Facebook marketing in particular. So Google just picked up one of the main marketing channels to a competitor (Facebook), and the acquisition is most likely going to give Google insider access to some very interesting Facbeook marketing data. (Until Facebook cuts off their API access, that is).

God and Gay Marriage: What Chick-fil-A Could Learn from Marriott

You don’t mix business and religion. Ever. This was a well-written piece, and one of my favorites published throughout the Chick-fil-A saga. This quote from Bill Marriott, CEO of Marriott, sums it up: “Our church is very much opposed to alcohol and we’re probably one of the biggest sales engines of liquor in the United States. I don’t drink. We serve a lot of liquor. You’re in business. You’ve got to make money,” he said. “We have to appeal to the masses out there, no matter what their beliefs are.”

This article proved eye-opening for us. Imagine that you’re a store owner (and some of you are) – you probably wonder if the people in your physical store are price-shopping with their smartphones. Amazon doesn’t have that problem. Furthermore, when you factor in the Amazon Price Check app, the situation only gets worse. That being said, Amazon offers a bunch of tools that will help you compete in the retail market, and this post from Forbes is a must-read! We’re interested to know: do you have an Amazon presence yet?

Continuing in the same vein as the Amazon story, here’s another helpful post from Forbes detailing the six basic steps of a strong SEO strategy for online retailers. We’d love to hear from anyone that has a physical or web store—was this helpful? What strategies have worked for you?

Wow, that was fast. Digg has now relaunched, under completely different code and in seemingly record time. Those Digg users of old, like me, won’t recognize it. It bears little resemblance to the old Digg. The shiny new version is now a news-oriented Pinterest. And judging by this drastic departure from the original interface, it’s clear that Digg is pursuing an entirely different crowd than those who comprised its original user base: think soccer moms instead of hackers.

The story of Digg brings up some great questions: What do you do when you rebrand? What if your target market changes? Do you try and transition over the old market? We’d love to hear your thoughts.

The recently released quarterly figures from ComScore on the state of the mobile market in the U.S. paints a clear picture. Data compiled from active users indicates Apple’s iOS is growing the fastest, while Android remains the biggest. Google’s Android remains in the lead with 51.6% of the market. Apple, however, remains in second position with 32.4% of the market—but still grew its share more than all of the other platforms combined (all without a new device on the market). Are you #teamAndroid or #teamApple?

The Future of Twitter’s Platform Is in the Cards

Back in June, Twitter announced that it would soon introduce stricter guidelines to its developer partners, limiting the ways in which outsiders will be able to use Twitter’s rich, ceaseless stream of data. An often-overlooked component of that announcement, however, does give some insight about what’s to come: Cards. The Cards technology “allows third-party developers to create richer, more compelling—and, above all, visually consistent—content inside of Twitter itself,” according to AllThingsD. The Cards technology is pretty much a 180-degree change in direction from Twitter’s current simplicity, causing many to be worried about the future of Twitter as we know it. Are you?

This was a +1 for the week. Read the data shared from Digiday. It might have you rethinking your mobile strategies.

There you have it! We crammed a lot into this week’s Best of the Web. Please let us know what you think of what we shared and if we missed anything in the comments below. Have a fantastic weekend—and go team USA!