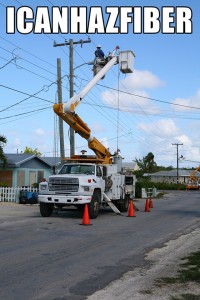 Hello, friends! It’s time for another edition of Best of the Web. Where to begin this week!? How is the “Call Me Maybe” meme still around? What is Google Fiber? Email marketing is now a nurturing relationships platform? No matter your interests, we’re pretty sure our weekly link round-up has something for you. As a reminder, we typically cover items in five categories: Integrated Marketing, Social, SEO, Mobile + Video, Awesomeness and Ridicularity. Annnnnd we’re off!

No need to wait for the fun stuff! I mean, it’s the weekend—let’s get after it! This video is of a dog that’s determined to conquer the doggie gate that stands between the dog and freedom. Animal lovers will no doubt have personal stories of such attempted feats. The best part? Watch the reaction of the second dog and what he does at the end.

We’re back with another installment of the meme that won’t die. The 2012 USA Swimming Team parodies Carly Rae Jepsen’s “Call Me Maybe.” Posted yesterday, it’s already got 330,000 views. In the spirit of the Olympics we had to include this one! USA! USA!

I’m a Liberal, Gay-Loving Person Who Works at Chick-Fil-A

It’s safe to say that Chick-fil-A isn’t having a good week. The fast-food chain caused an uproar when the company’s president, Dan Cathy, spoke out against gay marriage. The company then typified “Social Media Marketing: What Not To Do” amid claims that they created fake Facebook profiles to defend the company. And Chick-fil-A’s spokesman died, reportedly of a heart attack.

A bright spot in this mess? A thoughtful blog by University of Northern Iowa sophomore Linh Ta, the headline of which says it all: “I am a Liberal, Gay-Loving Person who works at Chick-fil-A.” We loved Linh’s blog because she not only raises several valid points and questions (including “Is it possible to have pride in your job, even when it doesn’t agree with your morals?”), but she also takes the time to weigh her thoughts and decisions without hastily rushing into a decision. And in a tricky situation such as this, that sort of careful deliberation and dialogue is exactly what should happen. Well done, Linh—well done.

Customer Relationship Management (CRM) – Are They Missing The Mark?

Interactive marketing agency ExactTarget raised some great points this week when they questioned current industry CRMs. One of the most interesting finds? According to a recent study conducted by eConsultancy, 98% of marketers use at least three channels to deliver messages to their customers, but more than half still store the data they gather from each channel in separate, siloed locations. Are you collecting data from all of your marketing channels? Are you organizing that data in the same silo?

SEOMoz is probably the biggest name in SEO and search marketing—and this week’s MozCon proved to be an info-packed event. The biggest takeaway for us in reading all of the blogs and chats coming out of MozCon was that Rand Fishkin, SEOMoz’s CEO, advised marketers to pay attention to Google+. He said he wouldn’t be surprised if, next year, there will be as much discussion of Google+ optimization as there is this year about optimization on all other networks combined. We’ve been bullish on Google+, and Rand is one person to have in your corner when it comes to opinions. Did you have a best takeaway from MozCon or the MozCon news?

The battle for mobile dominance (that Apple is apparently winning—at least for now) isn’t for the faint of heart. The fight is far from over, and regardless of which provider you personally favor, there’s one very real fact: the future competitiveness landscape of the lucrative smartphones market is at stake. Together, Apple and Samsung own 54% of the worldwide smartphone market in terms of device sales. Oh—and 90% of the profits, too.  And that sort of competition isn’t without a healthy dose of legal battles as one company sues the other on an almost daily basis. Most recently, Apple announced yesterday it’s buying Samsung’s Android security partner AuthenTec for $356M.

Mobile users are growing faster than the weeds in your front lawn. Furthermore, mobile users are demanding more and more loyalty programs. But these loyalty apps need a ‘fine-tuning’ of sorts to resolve security, reliability and usability issues that soil the lot of them. We’ve talked about how big mobile is going to get, and how mobile payments (affected by loyalty) are changing purchasing patterns altogether. What are your biggest gripes with the loyalty program(s) you use? What is your favorite—and why?

Google announced last week that the gigabit network was coming, and here it is – first up, Kansas City. Lucky residents of Kansas City, Kansas and Kansas City, Missouri will be the first in the nation able to pre-register now at the Google Fiber website. Expect to see people knocking door to door like they’re selling Girl Scout cookies (mmm…Thin Mints…) to motivate their fellow neighbors into signing up. Google Fiber claims (and promises) to be 100 times faster than average American broadband speeds. Google will offer three fiber plans: Gigabit + TV service is $120 a month with a $300 construction fee (waived if you sign a two-year contract). If you want Gigabit Internet service only, the cost is $70 a month, again with the waived construction fee with signed two-year contract. A free plan is also offered, requiring the $300 construction fee and limits you to 5 Mbps download and 1 Mbps upload speeds. If you’re in Kansas City, have you signed up yet? If you aren’t – are you ready for Google’s Fiber Network?

And that’s all she wrote, folks! Hope you enjoyed our wrap-up of the week that was on the web. Random question: what has been your favorite meme of 2012? And a not-so-random query—what was your favorite story this week?

Oh, and another note? Our fearless leader, Shelly Kramer, is in the midst of fulfilling a seasonal stereotype: the summer beach vacation. She’s left us crazies in charge of the asylum for the next week, so brace yourselves—we’ve got the keys to the kingdom, and we might just decide to get a little wild. Don’t worry, Shelly—we’ve got everything under control!

Lead image via The Pitch