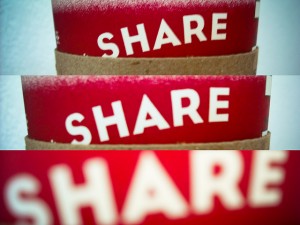 There’s a new search sheriff in town. In the aftermath of the Panda/Penguin search algorithms, social shares are now more important than keywords. The data is proving it. In a recent comprehensive study of UK Google ranking factors by search analytics firm Searchmetrics, this was one of the key takeaways.

The study collected data from February to March 2012 from a basis of 10,000 selected top keywords, 300,000 websites and millions of links, shares and tweets. The ranking sites’ content included: 248,603,582 Facebook comments, 2 billion shares and 7 billion likes. The goal was simple: Which factors are relevant today for a prime ranking in Google search results?

According to the data, social signals correlate highly with good rankings. Five of the top 6 signals are social: Facebook shares, Facebook total, Facebook comments, Facebook likes and tweets – with backlinks being the only non-social ranking factor in the top 6. Facebook, Twitter and Google+ now strongly correlate with high rankings in Google’s index. 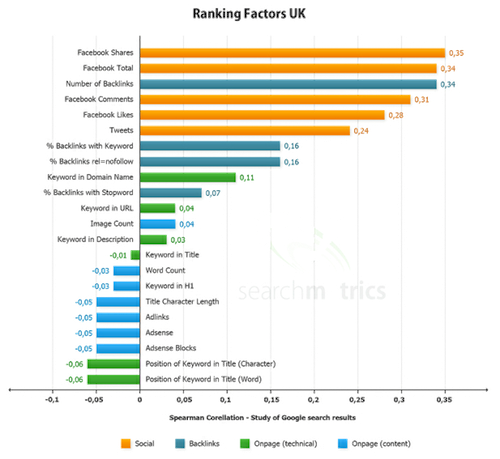 Here are some other key highlights from the study by Searchmetrics:

Too much advertising can be harmful

Pages with too many advertisements have a harder time achieving high rankings. This makes sense, since earlier in 2012, Google announced that it would penalize sites displaying too many ads at the top of the page. The study found that both AdSense and Adblocks had a negative effect on Google SERP.

Sure, social media is powerful—and getting more so. But backlinks will continue to be one of the most critical factors in achieving good SEO rankings. If you, like me, pay attention to SEO trends (and you should), keep an eye on what factors will influence the analysis of backlinks. For instance, Google currently favors a more natural link structure as opposed to the perfectly optimized keyword.

In Searchmetrics’ report, the effect of brand power is not only obvious—it tends to turn ‘conventional’ SEO logic on its head. Strong brands rank in the top 5 even without perfectly conforming to page structures, which gives us the impression that title tags, headlines, etc. aren’t nearly as important to search results as it is to those in the SEO trenches.

Domain names with keywords strongly correlate to higher search rankings, much more so than keywords in the rest of the URL. The title and the H1 headline, not so much—so little, in fact, that the Searchmetrics report concludes that they have little impact on ranking.

Google+: The jury’s still out

Google +1s saw a significant correlation of 0.37 with search rankings. Not so fast, Google+ fanatics—the data proved to be inconclusive due to low user numbers. According to Searchmetrics CTO and founder Marcus Tober: “We have not included this figure in the overview because we consider it to be too unreliable. This is because Google+ does not currently have enough users and the possibility of a +1 leading directly to changes in SERPs follows accordingly, since pages receive +1s in the order that they would already be placed without them. When Google+ has values that are stronger and more independent from SERPs, these values will also be included in the overview. That Google is trying to make Google+ an important player is indisputable and therefore SEOs should be sure to keep an eye on further developments.”

What does this mean for you as a marketer?

Pay attention. Plain and simple, this data shows that social shares have a significant impact on SEO traffic. And that means you want to ensure that the content you’re creating appeals to your audience and encourages them to share it as often and as widely as possible. Even though Searchmetrics cautions that social shares don’t guarantee a certain affect on search rankings, or that they’re even used by Google as signals, the data tells a much different story—and as us data lovers know, the numbers rarely lie.

The takeaway is this: social media is having an increasingly powerful impact on Google search. As a brand, your first step should be to create rich and thought leadership-quality content for your website. Second, distribute it throughout the social media channels you’ve developed. By housing rich, high-quality content on your website, you stand to gain from both social shares and the still relevant (and important) backlinks. But of course, you’re already doing this, right? Funny how sound digital marketing principles make for good SEO results, too.

Are you surprised that social shares are having a bigger impact on search results? And are you fine-tuning your digital strategy to keep pace with this SEO shift?