For many in the social space (including me), the jury’s still out on Google+. And although the site’s user base is far less than that of Facebook, new stats have revealed an interesting finding: Google+ beats out all other social sites in terms of customer satisfaction.

According to numbers released from the American Customer Satisfaction Index, Google+ not only debuted on the index for the first time—it dominated the rankings, earning a higher customer satisfaction score than YouTube, Pinterest, Twitter, LinkedIn and Facebook. That surprises me a teensy bit. I mean, those Pinterest users are a rabid bunch (myself included). 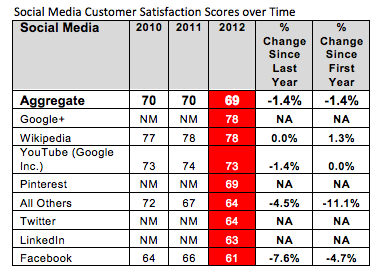 So what makes Google+ so appealing to its users? It shines in areas where Facebook falls flat.

“Google+ does well because it doesn’t have traditional advertising, has more focus on privacy and provides a better mobile experience,” according to a story on CNET. “Facebook users, on the other hand, complain about ads and privacy concerns, with the most frequent complaint being changes to the interface, with the most recent one being the introduction of Timeline.”

Facebook is far superior when it comes to market penetration as compared to Google+. Yet G+ (purportedly) offers a better customer experience—and it will be interesting to see which attribute is more important in the long run. And it’s no surprise that G+ doesn’t have traditional advertising – it doesn’t need it. At least not integrated into its social network. And the better mobile experience part of the equation – that’s a huge deal. As an aside, I participated in a Google Hangout the other day using my mobile device and it was stupendous. Score one for Google+, for sure, on a better mobile experience.

It’s easier to build an audience if you already have a solid, effective product or tool that makes users happy–or if you have early adopters who like to experiment and dive into new and different things. I think that many Google+ users went into the experience wanting to like the platform—and loving it from the very beginning. I know I did—and I still really enjoy using G+, even if I don’t use it as often as I do Facebook, Twitter and other social networks.

Building brand loyalty is no easy feat, and it seems that Google+ at least partly tapped into some customer satisfaction secret sauce with the tech and early adopter crowd. And that crowd, we don’t really care what all the haters think and it’s fine with us if every Tom, Dick and Harry isn’t flocking to G+. We also don’t tend to mind change as much—in fact, we’re often the ones suggesting it.

Facebook, on the other hand, has an ‘everyman’ user base and continues to innovate, which is great for Facebook, but not always great for a vast majority of users, who typically also loathe change. Facebook’s regular addition of new features and capabilities is a constant source of irritation for its user base—both for personal users and for brands. Facebook is like the lover we just can’t quit. We rail against it, hate some of the constant changes to the user interface, loathe privacy violations and constantly gripe and whine–but we just can’t quit it.

Facebook and Google+ will continue to battle it out, and the rest of us will watch and wait to see what happens. I thought, however, these results were interesting enough  to write about—and still very much enjoy using Google+.

If, by chance, you’re curious about what Google+ can do for you (and you’re in the non-profit sector), make plans to join me next Thursday for a Google+ For Nonprofits webinar as part of the ThinkTank Summer E-Learning Series. I’ll be chatting all things Google+ with the brilliant Debra Askanase, and even if you don’t work for a non-profit, you’ll still come away with actionable tips and ways that you can better leverage Google+ as part of your larger digital marketing strategy.

What about you? Are you a G+ hater or a fan? Think this survey is on crack or that it makes sense? C’mon, you know you wanna weigh in.