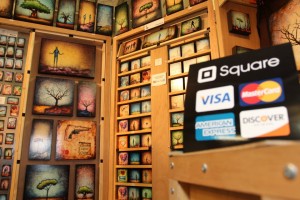 Consider this. You’re sitting down in a local coffee shop. Without looking up from your iPad you tell the barista that you’d like a cappuccino. When she returns with your cappuccino you tell her that will be all and to charge it using your mobile device. Your phone in your pocket begins to vibrate – the purchase of that cappuccino is now complete. You pull the phone out of your pocket, add a tip and sign your name.

The mobile payments arena is HUGE. Whether it’s purchasing your cappuccino at Starbucks, a new tie for a date at Macy’s, or a power drill at Home Depot – it’s happening. Adoption is slow, but it’s happening.

You’ve probably heard of Square.  Square is a San Francisco-based start-up that’s at the epicenter of the disruption. Its founder and CEO, Jack Dorsey, was also one of the founders of Twitter. Often compared to Steve Jobs, Dorsey’s had his eyes set on radically changing the way we process payments for both services and goods for over three years.  But as mentioned, adoption isn’t as fast as tech pundits might lead you to believe. Despite recent studies that show it’s growing, there’s still a chicken and the egg scenario: businesses have invested huge amounts of money into their existing point-of-sale (POS) systems and consumers are not yet educated enough on the mobile payment options available to them.

It feels an awful lot like the calm before the storm, doesn’t it?

Well, that’s because it is. There are more signs that the mobile payments revolution has arrived than there are that the Mayan calendar didn’t have leap year. But as it stands, that’s all they are right now–indications. Changing the way that Americans pay for things is going to be hard work. We’re 4-5 years behind Japan or China when it comes to mobile adoption, but it’s happening.

This revolution is not only being moved forward by innovative start-ups like Square or Seconds (which is a text-based mobile payments platform) – the big boys are innovating and iterating like mad men, too. Everyone from massive technology companies and financial institutions to giant telecoms and national retailers are working on mobile payment systems. And in this mad rush for first in the pool, that could be problematic. It’s a bit like the Wild, Wild West out there. Platforms are being built without an agreed upon common technologies standard.

What does that mean for you as a consumer? That kind of stinks. In many instances, mobile payments won’t work across devices, wireless networks, credit card types and retailers. Where does this leave consumers? In a state of epic confusion.

It feels a lot like money is falling from the sky. What’s at stake: millions of merchants, billions of transactions and trillions of dollars. Which is why it’s turned into the free-for-all that it is today. Square might have been the first to gain level one of critical mass, but their deep-pocketed competitors are starting to show their hands. EBay’s PayPal recently released its version of a competing card reader. Google Wallet has a distribution model in its Android phones. And then there’s Apple. Oh, Apple. Apple is selling more iPhones a day than there are babies being born. Oh, and they have their own payments processor in iTunes that has some 200+ million credit cards (waiting to release its rumored iPay) on each device.

The dichotomy of what’s at stake is a fascinating point of view from the sidelines. Mobile payments are going to be very advanced and complex technologies. Technologies that will drastically simplify things for consumers.

Amazing technology meets dead simple purchasing. If you have your mobile device, you’ll have your money, and you won’t even have to move out of your chair at the coffee shop to buy a cappuccino.