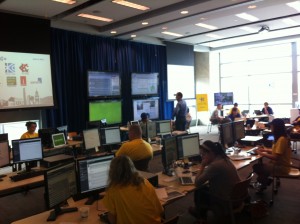 As thousands flock to Kansas City for the 2012 MLB All-Star Game, a small group of volunteers is holed up inside H&R Block, manning a social media command center designed to track the conversation surrounding #KC and the #ASG, as well as engage visitors and residents alike.

In the command center, trained volunteers work in four- to five-hour shifts, responding to tweets that include the #KC or #ASG hashtags. Parking and event questions abound, as do requests for restaurant recommendations and attractions. The organized effort also includes a Tumblr that regularly dispenses photos, tweets, recommendations, polls and other KC-related content.

The overall message? Kansas City is not only listening—the city is here to help, too.

“We want to use our resources to show what Kansas City can do,” says Alan Carr, vice president of marketing and communications for the Kansas City Convention and Visitors Association.

A Command Center Is Born

Indianapolis paved the way for citywide social media command centers after launching one during Super Bowl XLVI. And Kansas City was paying attention. A tweet from Kansas City Mayor Sly James (below) served as the catalyst for an All-Star Game command center that would engage with and help #KC visitors in the days leading up to the All-Star Game.

Within the command center, curators track and review tweets using Radian6, and monitor the overall flow of information and conversation using Spiral16. As of late Sunday morning, more than 10,000 tweets had been reviewed since Thursday. Reviewed tweets are then forwarded to volunteers, also called engagents, who respond with info, links and personal recommendations where applicable.

“The coolest part about the command center is the volunteer effort,” Carr says. “We’ve brought in the expertise of locals to participate in the conversation.”

“When you get something like this started, you don’t know if it will make an impact,” she says. “Seeing people respond, share and ask makes the hard work worthwhile.”

The All-Star Game and related festivities may only last a few days, but the hope is that the Social Media Command Center will establish a precedent in Kansas City that guides social participation in future events—and in the city in general. The CVA, for example, has established an online social hub that will capture an ongoing dialogue about #KC. 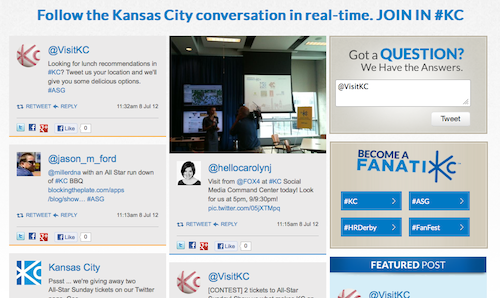 And for those involved in the city’s social media community, the command center represents a rapid growth not only in the industry, but also in the community’s collective awareness.

Lisa Qualls, vice president of interactive strategy at Summit Marketing, was one of the first members of the Social Media Club of Kansas City, an organization that began after an email from Ed Roberts. Now 1,500+ members strong, SMCKC’s role as a partner in the command center represents just how far the organization has come.

“The command center is a great example of what happens when you bring likeminded people together and empower them to make things happen,” Qualls says. “It’s all about the people—they’re what make this phenomenal.”

After all, that’s what social media is all about. Behind the technology and tools and platforms, social channels are simply about listening and conversation.

And the message during this inaugural command center effort? Kansas City is not only listening—the city has a voice and is ready to use it.