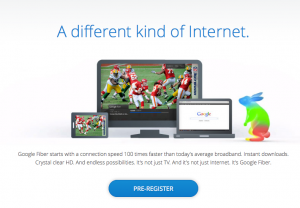 Good news, Kansas City—Google Fiber is almost here. Earlier today, Google executives gathered in the new Fiber Space (1814 Westport Rd.) to share info about the service, when it’s coming, how much it costs and other big news, including the scoop that Google will debut GoogleFiber Television in Kansas City.

The lightning-fast fiber connection, which blasted through speed tests at today’s event, will encompass Internet and television. GoogleFiber Television includes a full channel TV line-up, 1TB Google drive, a network box and access to traditional cable channels. Subscribers who want premium movie channels will have to pay extra for them, although cost information wasn’t immediately available. GoogleFiber Television also includes a number of fiber channels that feature programming from local organizations and are a part of Google’s effort to use TV as a content publishing platform—and to our way of thinking, it’s a great way to get more people invested in what local organizations and non-profits are doing.

Other cool news? For one thing, GoogleFiber Television doesn’t come with a traditional remote—instead, it’s controlled by a Nexus 7 tablet, which is included with every package. Easily accessible tablets? We can’t wait to see what that will do to mobile marketing numbers.

Prices and plans were also unveiled during the event. Each household that wants Google Fiber will have to be individually connected to the fiber optic network, resulting in a one-time construction cost of $300. For anyone who signs a two-year TV or Internet contract, however, the fee will be waived. TV and Internet combined is $120/month and Gigabit Internet only is $70/month.

So how do people get Google Fiber? In what we think is a brilliant twist, Google unveiled the idea of a six-week rally. From now until early September, Kansas City area residents can go online and enter their address to find out which “fiberhood” they live in. From there, you can pre-register for a $10 fee.

The rally will determine the areas of highest interest for Google Fiber. Google execs firmly believe that the technological capabilities will work better if a larger group of people is using them. Once these starting points are determined, fiber will be rolled out to other areas.

Throughout the rally, residents are encouraged to gather support from their neighbors and friends in order to bring Google Fiber to their neighborhoods. That sense of community is a theme that not only ran throughout today’s presentation, but also emerged in several Google-produced videos, including one that debuted earlier this month entitled “Thank you, Kansas City.”

You’d better believe that the V3 team has already pre-registered on behalf of their neighborhoods—we can’t wait to get our hands on GoogleFiber Television and Gigabit Internet capabilities!

For those of you outside the area who want to get in on the action, isn’t it time you joined us in Kansas City?