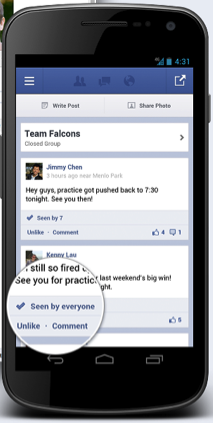 The latest news from Facebook is that you can track posts in Facebook Groups with read receipts. Is that good or terrible?

Facebook Groups will soon display a list of names (as well as a count) of who’s seen each post. The feature is in the process of rolling out to all English language Facebook groups, so keep your eyes peeled.

When someone publishes a post in Facebook Groups, the total number of impressions will be updated as each person sees the content. In addition, group members and admins can hover over the count to see a list of names. And supposedly, the new feature is available both on the web and via the mobile app.

At first glance, the new feature seems a little stalkerish. But, for brands, if you participate in or manage a Facebook group as part of your digital marketing strategy or to gain industry insight, consider the new information to be another type of analytics. If you notice a higher number of people have read a particular post, for example, you could examine the type of content published and use it to guide subsequent posts.

And if you’re part of a group that’s disseminating important or time-sensitive information, this is a good way to keep track of who’s seen the posts—and who may still be out of the loop.

It will be interesting to see if this feature becomes more widespread throughout Facebook, such as in the News Feed. We tend to agree with TechCrunch—it could make Facebook a little more conversational if you can see who’s at least read your posts, even if they haven’t liked or commented on the content. At the same time, however, there’s something about this that’s a little skeevy. Lots of Facebook content consumers are lurkers (aren’t we all lurkers at times?), and this might well be yet another feature that people hate.

It’s like how cool it used to be to call someone you had a mad crush on just to hear their voice, then hanging up when they answered—and no one was the wiser. Then, Call Stalker came along, coupled with that doggone *69 business and that bunch of fun flew out the window. Not, of course, that I ever did this or anything.

What do you think? Love it or hate the idea with a passion? Of course, it’s not like it matters, because Facebook will do what Facebook will do—whether we like it or not. The upside, it’ll give the haters something more to write and wail about.