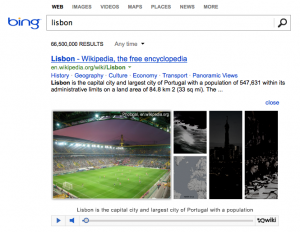 Bing just got a whole lot sexier. Microsoft announced earlier this week a partnership between its search portal, Bing, and New York-based start-up Qwiki. Bing describes Qwiki as “interactive presentations combining images, videos, maps and spoken narration. In other words, Qwikis are a gateway for further exploration that offer a unique, visual experience to help you quickly get information and do more.” Bing search is changing: text-only is out and sounds and visuals in your search results are in.

Video is huge. How huge? comScore recently released April 2012 U.S. Online Video Rankings that tallied 181 million viewers watched nearly 37 billion online content videos. Qwiki stands to aggresively make Bing more enjoyable AND useful for serving up relevant, helpful, and engaging search content. We can’t overstate the social angle either — as we discussed when we introduced you to Qwiki, these tools will allow users to create Qwikis based on their social media aggregate, integrating Twitter, Facebook, YouTube, etc., into their personalized Qwikis. Sweeeeet. Think about it – it’s pretty cool. And yes, cooler than a Google Places page – at least from an experience standpoint.

Don’t think that advertisers aren’t noticing the trend towards video consumption, either. Video ads saw another record-breaking month with nearly 9.5 billion views, representing 1 in 5 videos viewed online in April, according to comScore.

Qwiki undoubtedly enriches the search experience inside Bing — when shown in a search result a user just has to hit “play.” While viewing a Qwiki, the video player expands and additional aggregated content is pulled from across the Internet and shown. There are no limitations as to who can create the Qwiki content through a web-based creator tool and application programming interface for developers. In simpler speak? Whether it’s NBC News or Mashable, companies can create their own content.

Doug Imbruce, Qwiki founder, wants marketers to think of the format as a movie trailer for mobile and desktop Web pages, an unpaid search ad in organic results. “By 2015, about 90% of IP traffic will come from video,” he said in an AGbeat story. “Now, for the first time, you have anchors from ‘Nightline’ making interactive content.”

Publishers and brands are becoming content creators. According to Deanna Brown, CEO of Federated Media Publishing, “Content, in the right context, is ultimately king.” The dynamic of “who” is creating the content and if brands are willing to invest the time has yet to play out. Her interview with Brian Solis can be viewed in its entirety on Mashable — and we highly recommend checking it out. If publishers and brands invest in creating video content, it does nothing but improve the context of content by leaps and bounds. The shift towards video is a huge game changer for marketers, too. Targeted messages through this emerging video format in search results creates an entire new data consumption process for/by consumers. While the Qwiki is playing, users can click on the content to gain additional information or even generate a new search.

This partnership is a big win for Qwiki, as the technology had not seen mass adoption since its release in 2011. However, the win might be even bigger for Microsoft’s Bing. Along with the social layer overhaul of Bing earlier this month, Microsoft is putting its money and resources where its mouth is. Bing wants to be your search portal of choice: both socially and visually.

Imagine the day you can search for some new basketball shoes, and you have LeBron James telling you why his Nike shoes are the best — then you can link back to his Twitter account and tweet at him thanks for the advice, all through the search engine. Well, that day is coming … and probably a lot sooner than LeBron’s first NBA Championship.