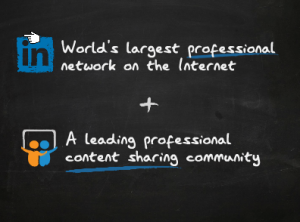 LinkedIn is on a heck of a roll. The professional network announced yesterday that it acquired SlideShare for $119 million in cash and stock.

The acquisition isn’t a total shock; the two platforms have shared a collaborative relationship that includes the ability for LinkedIn users to integrate a SlideShare plug-in into their profiles. Yesterday’s announcement “is a natural culmination of this partnership,” according to the SlideShare blog.

And what would a SlideShare announcement be without slides? The company created a quick preso to share more details about the acquisition.

Here at V3, we’re huge fans of both LinkedIn and SlideShare, so we’re happy for both companies. And we’re eager to see what sort of increased integration might be unveiled as a result of this acquisition.

After all, uploading your presentations to SlideShare is a great way to boost your content’s reach—and it can be an effective tool when it comes to lead generation and new business development, too. Add that capability to a site that’s 160+ million members strong and dedicated to professional networking, and you’ve got the makings of some powerful tools.

LinkedIn’s acquisition of SlideShare is the latest in a string of smart strategic moves. Earlier this year, the company announced that it purchased Rapportive, a free plugin for Gmail users that gives users relevant information about their contacts, including a snapshot of social profiles. That purchase came just a few weeks after LinkedIn announced its fourth quarter results at the end of 2011, including the achievement of a 150 million-user milestone and promising signs of strong national and international growth.

It remains to be seen in regard to how LinkedIn will use Rapportive and SlideShare. According to SlideShare CEO Rashmi Sinha in a blog post, “…Our team will continue to do what we’ve been doing, which is to develop new features and make the site even better. Over time you will see some integrations that take advantage of the great fit between SlideShare and LinkedIn.”

Kudos to all involved parties! We’ll be sure to keep our eyes peeled for new features that come as a result of this acquisition.

Oh, and if you’re still holding out from hopping on the LinkedIn bandwagon, what the heck are you waiting for? Let’s connect already!