close
I’m a gadget addict, I’ll admit it. And I’m a mom. Ergo, there’s no one better to write about tech gadgets that your wife, mom or significant other might like. Trust me on this one. 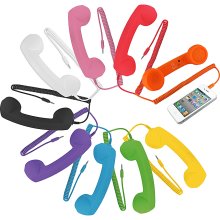 A Kara Swisher demo of this phone and her comment that it was hysterical walking the streets in NYC talking on the MoshiMoshi Retro Pop Phone Handset and watching the reactions she got was all it took for me to hit the “purchase” button. Love the product, and Kara. Done deal.

Thing is, if you have to talk on the phone—and sadly, I do—a lot, this handy handset makes it oh-so-much more comfy to do so. Say what you want hipsters, but back in the day, phone handsets were built for comfort. The day this baby arrived my hubs espied it. The next thing I know, he’s claimed it as his own, is traveling with it, showing it off to all his customers (most of whom are middle-aged, geeky guys) and placing orders en masse.  Of course I had to buy another one. And you’ll love it as much as I do—as will your mate–so take my advice and buy it!

I’ve also noticed that it’s being carried now in a bunch of retail stores (it’s that fun) (really), one of which is Urban Outfitters. So if you pop into one of them, you can get it there, too. There are some less expensive imposters out there, but I’d hold out for for the Retro Pop – it’s sturdy and all kinds of awesome. 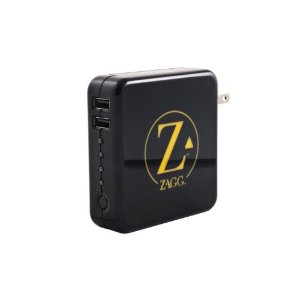 My love affair with Zagg began quite quickly when I fell for the ZaggSparq Portable USB Charger. With dual ports (meaning I can charge two devices simultaneously), it inevitably makes me just about the most popular person at any conference, meeting or event where battery life is waning. Actually, I’m pretty popular anyway, but this makes me doubly so.

This has been my go-to gift for friends for birthdays, holidays and other special occasions and when you buy from Zagg, costs $99. I recently discovered it on Amazon for almost half price, so if I’ve convinced you, head over there and score yours for about $53. Score.

This charger is especially good for women, because it’s the size of a hockey puck and fits easily in your bag or purse and you can tether your phone to it. Guys don’t love it as much because it’s bulky enough that it doesn’t fit in a pocket, but they don’t mind using it when I’ve got mine along. I use it to charge my phones and it’s saved my life a few times when an iPad has been running low on juice and I need it to keep a recalcitrant 6-year-old quiet. Buy one, you’ll never regret it. In fact, you should do like me and buy two.

I don’t like iPhone cases because they make my phone bulky. And apparently the thought of dropping and shattering the glass on my phone has not induced me to start using a case. I’m weird that way. Some people might use a different word, but weird works for me.

But when traveling, in addition to never leaving home without my Zagg charger, the Mophie Juice Pack Air case is a godsend. It’s got a built in extended battery and is just about as bulky as any other case I’ve used, but has the added benefit of a charger built in—that one’s a no brainer.

At $79, it’s money well spent. In fact, you’ll pay $79 buying from Mophie or at the Apple store, but only $59 if you buy on Amazon. Yet another reason to love Amazon. Buy this case. In fact, much like the Zagg charger mentioned above, this is one you might just as well go ahead and buy two of – one for her and one for you. 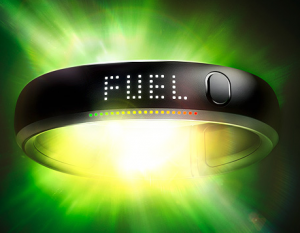 I saw the early news of the Nike+ FuelBand Fitness Tracker product launch from Nike and instantly wanted one. But then, I want everything that has anything to do with technology. Crap. It’s a shame I’m not loaded.

Okay, so the FuelBand is a bracelet that you wear on your wrist that does exactly what the product name says it does: tracks your fitness. It allows you to set a fitness goal (that’s modifiable as you begin to suck less, of course), and then tracks your movement throughout the day and shows you where you are in terms of meeting your goal. Translated: it’s like a big neon sign on your wrist that screams “Hey fat ass, you’ve not worked out at all today, so get going if you don’t want to be a complete and total failure.” Frankly, that’s just what I need.

I love it. I bought one for my husband and for my right arm at V3, Katy Schamberger, and we’re all wearing, using and competing against one another. You can download the iPhone app and sync the FuelBand. It shows you your progress and you can compare your activity (and results) on a day-to-day basis. I’m not kidding when I say that it really inspires you to get moving and to meet whatever goal it is you’ve set. Oh yeah, there’s the gamification thing – the element of competition that makes it even sweeter. I didn’t explain that.

Using the FuelBand app, you can connect to your friends via Facebook and compete against one another as you individually work toward your fitness goals. Who doesn’t love that? Gamification adds just the right element to the Nike FuelBand and while it’s not one hundred percent perfect yet (yes, all I do is sit around and think of ways it could be even more cool), it’s pretty doggone cool. It’s not cheap – for me, investing $150 in my quest for fitness is well worth it. Buy it. You won’t be sorry.

So there you have it. My suggestions for just the perfect gift for your gadget- or tech-loving mama for Mother’s Day. If you buy one of these, I can promise she’ll love it. And I can also promise that in no time, you’ll be jonesing for one (or all) of them yourself.