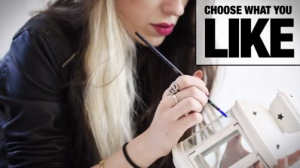 More and more brands are turning to Pinterest as an additional component of their digital marketing strategies, but Kotex recently took their Pinterest presence to the next level by launching what it calls “the first Pinterest campaign in the world.” We’re not sure it’s quite that, but it’s an interesting move nonetheless.

Once the women were selected, campaign creators studied the women’s Pinterest boards to find what inspires them. After that, the campaign team created care packages that served as real-life versions of the pinboards, filled with objects and décor that mimicked those that had been previously pinned.

In order to receive the care package, the participants simply had to re-pin Kotex’s invitation. After that, the care packages were delivered to each woman’s home. And that’s when the campaign did what the brand probably hoped it would do – it got some attention.

The agency created a video as a case study on the campaign.

The sharing stats as outlined by smoyz were as follows:

To our way of thinking, a consumer brand could potentially put up some pretty impressive numbers – far beyond what’s reported here – if you found the right folks from your Pinterest demographic and/or if there were more of them. After all, for a brand like Kotex, targeting 50 women isn’t all that many. Although, to give them credit, I’m sure personalizing 50 experiences was no small task. The impressions measured don’t seem all that impressive – after all – that’s just eyeballs. And 2,300 interactions seem small, too.

Call me crazy, but it would have been better if there were some kind of call to action in this campaign – something beyond just making a claim to fame about launching a campaign on Pinterest.

What about each blogger being assigned PURL that could be shared on social networks with downloadable coupons for Kotex products that were tied to this campaign and you could actually track sales back to the initiative? Or any number of other creative things that would do more than drive impressions – but would actually drive sales. That would get my attention!

Oh, I know, traditional media like TV and radio have been looking at impressions and reach for a very long time – and brands and their agencies have been very happy with that. With the technology that’s available to marketers now, and the ability to track data so much more effectively than ever before, it just seems to me like we can – and should – be doing more.

All in all, I think the campaign is interesting – and I love the video they produced. Launching the campaign on Pinterest, then watching it grow organically and spread to other social networks is a marketer’s crack cocaine. And this serves to demonstrate, in real time, how the rookie social network Pinterest—when used correctly, it can be a powerful referral tool to help drive people to your other social profiles and your website, as well as spark conversation that also transcends platforms. No one in their right mind would dream of making Pinterest the one and only hub of their company’s digital operations, but when used as part of a larger digital strategy, Pinterest continues to emerge as a platform that demands consideration, regardless of your business or industry.

It will be interesting to see how other brands use the platform—and I’m sure we won’t have to wait long to find out.

What are your thoughts on the Kotex campaign? Is it a brilliant marketing move? Or, in the words of Fast Company Co.Create’s Joe Berkowitz, “mildly creepy yet fun?” Are you like me, and underwhelmed by the results, or do you think they’re as good as the folks at Kotex and smoyz think they are? I’d love to know your thoughts.