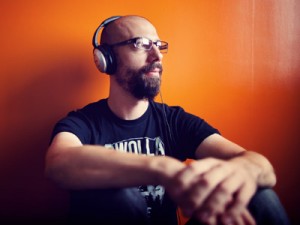 During last night’s Technology Entrepreneur Speakers Program, Dwolla co-founder and CEO Ben Milne spoke to an attentive audience about start-ups, entrepreneurial lessons and, of course, Ashton Kutcher (more on that in a minute).

In a candid discussion, Ben shared his entrepreneurial journey, starting with a painful year of family illnesses and deaths that gave him “a really f***** up perception of risk.” Those experiences also taught Ben a powerful lesson that he encourages any entrepreneur to embrace.

“If you want to do something, do it,” he said. “Spend your life doing something that’s meaningful to you.”

And that’s exactly what he’s doing.

The Story of Dwolla

Although he’s successfully started other companies, Ben is most known for Dwolla, a Des Moines-based startup. The cash-based payment network allows users to pay for goods and services on the Dwolla payment network, and also tap into the peer-to-peer payment platform. Yet the service processes payments without the typical transaction fees or even credit cards—with Dwolla, users can use phones, computers, social networks and physical locations to send and receive cash.

Like most start-ups, Dwolla has been a labor of love. Ben says he’s worked on the business for four years; Dwolla opened a year and a half ago. The idea for Dwolla grew out of Ben’s growing obsession with payments.

“We can’t exchange our money in a way that doesn’t make it worth less,” he says. “Dwolla is solving a real-time issue.”

And as a result, the company continues to grow. Dwolla announced a $5 million Series B round of funding in February, and made national headlines last week when the company announced that Ashton Kutcher contributed to Dwolla.

“I’ve met few people who are as brilliant on product as Ashton,” Ben says. “Ashton the investor is very different from Ashton the actor.”

“The vision for Dwolla isn’t to become a lifestyle company,” he says. “I want it to become an ubiquitous part of the international financial system—the Internet version of the Federal Reserve for the world.”

What Entrepreneurs Need to Know

As Ben shared his story with the Tech ESP audience, he also discussed a number of invaluable lessons for entrepreneurs of any industry. As anyone who’s started a company knows, it’s certainly no easy task—in fact, entrepreneurship can be downright grueling and all-consuming.

And as Ben points out, being an entrepreneur gives you an opportunity to discover yourself.

“All that building companies and being an entrepreneur is is discovering yourself,” he says. “My first company was an exercise in confidence. I realized that if I put my mind to it, I could do big, empowering things.”

As you pursue your entrepreneurial ambitions, be prepared to answer three questions:

And once you’ve established those answers, stick with it. You’ll likely confront a number of obstacles and will probably fail multiple times. As he developed Dwolla, Ben says he reached a point during which “everyone he knew” told him “to quit and get a real job.” And now? Well, we’re pretty sure Ben is having the last laugh.

Don’t let your location be a factor, either—in fact, embrace it. A lot of people are surprised to learn that Dwolla is based in Des Moines, yet Ben wouldn’t have it any other way.

“Dwolla can only be built in Des Moines,” he says. “We have traction, a base, users—why would you remove a company from a place in which it works? We know it’s going to be tough to build a company in the Midwest, but it’s still possible. There’s nothing that someone can do on the coasts that we can’t do here.”

Want to know more? Ben took a few minutes after his discussion to chat with me about start-ups, scale and why the Midwest is a great place to work.

Now you’re fired up and ready to go start something great, right? Keep us posted on your entrepreneurial adventures. And if you’re interested in hearing more from people like Ben, be sure to keep an eye on the Technology Entrepreneur Speakers Program, presented by the Missouri Small Business and Technology Development Center. Next up is Thad Langford, former president of Zave Networks and current executive in residence at OpenAir Equity Partners, on May 15.