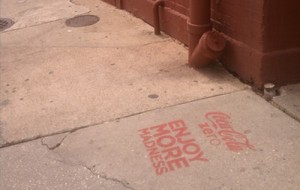 You’ve probably already read about Coca-Cola hiring an agency–or not–to stencil on sidewalks in the historic district in New Orleans during the recent Final Four tournament. And you might have heard that neither Coca-Cola nor the agency hired to do the deed did a great job of standing up and taking responsibility.

We wrote about this last week and there were some interesting comments. Some friends in NOLA were very outraged that a brand would be so callous as to engage in what is essentially strewing graffiti (spray paint on flagstone) throughout a historic district in their city without first obtaining the necessary permits and permissions.

Others also thought it was a ballsy move and one that someone should have done a better job of researching. Some people thought it was no big deal (especially one blog commenter who mentioned that he thought it rained pretty often in New Orleans, so he didn’t know what the big deal was all about). And all those varying thoughts and opinions is what makes a blog and a social media community so cool. It’s a veritable instant focus group.

Why do we care? We’re interested in this kind of occurrence from a corporate communications standpoint. It’s not our desire to excoriate brands that make missteps, but it is our job to observe, discuss what transpired and learn from these occurrences. Crisis management, reputation monitoring and management–those are big parts of the services we provide for clients, ergo paying attention is part of delivering great service to our clients. And this was a situation that was really an interesting one.

In our original post we referenced the letter written to the City of New Orleans by NolaFemmes‘ Kalen Wright, a/k/a @lunanola. NolaFemmes had been discussing the situation on their blog, spurred by a post by Kalen. What we didn’t know when we wrote that original post was that Kalen was pretty much the person responsible for discovering this graffiti. And she took to Twitter, to her blog, and to her computer in an effort to raise awareness about this defacing. There is nothing like one really pissed off person who knows how to use social media to spread the word.

On the NolaFemmes post, a commentor shared what quickly made the situation even more interesting.

You know that agency, the one that didn’t come forward and take any responsibility for the faux pas? Well they placed this ad on Craigslist a few days before the Final Four event. And if you notice the language in the ad – they clearly mention that the stencils will be placed without city permission. Excellent—they knew they were pretty much breaking the law before they did it.

And the funny thing about removing things from the Web—someone is usually smart enough to grab a screen capture (like this one from Sara), just in case. You guessed it—this ad was removed, but not before it was documented.

Who knows what really happened? Originally, Coca-Cola denied knowledge of the guerilla marketing stunt and pretty much threw the agency under the bus. I’ve not cared enough to try and find out who the agency is that they outsourced to, but I’m sure that’s not a secret any more. Here’s an excerpt of what was reported by Best of New Orleans, quoting Kel Villarrubia, Senior Public Affairs Director for Coca-Cola New Orleans:

Interesting. An agency places an ad and clearly states the work is being done without permits (which was more than a little dumb). The brand says the agency misunderstood permits. Either way, it’s … well … it’s bad. And it continues to amaze me that the guerilla campaign—or any campaign—was handled in such a laissez faire manner.

One final note, on a comment in the original post we wrote, Kalen added that as she spoke with one of her friends about this, that friend mentioned she had personally witnessed one of the stencils being painted on the corner in front of her workplace. And the team doing the painting was using (driving) a tricked-out promotional Powerade mini-truck. Hmmm. Wait, who is it that owns the Powerade brand? I think you know the answer.

Funny thing—often it’s not the mistake that gets consumers angry, it’s the posturing and positioning, and perhaps even the lying or misrepresentation that does the most damage. Who knows what happened here—but it does cause a body to wonder.

Kalen sent a note today advising that that Coca-Cola is donating $10K to the Mayor’s Office of Cultural Economy. That’s probably a good thing. I’d say they got off easy.

And so, while this matter is resolved, hopefully brands and agencies have taken notice. It’s not really all that hard is it? Do your homework, do things the right way and when you screw up—(and you will), stand up, admit it, apologize, take your lumps, fix the damage and move on. And if at all possible, when you can avoid lying about it, do. Oh, and try not to do it again. That’s probably key, too.

The whole thing just seems so silly to me. I have to agree with PR Newswire’s Steve Goldstein when he said: “Had Coca-Cola merely taken responsibility for breaking city ordinances with its own campaign for its own product, the fallout would have been much less severe—and widespread.” Amen.

I think a lot of NOLA dwellers are thankful to Kalen for her intrepidness in this situation. Coca-Cola, maybe not so much. But in any case, it’s pretty impressive, woman (tipping hat).