In a recent CEO, Social Media & Leadership Survey designed by BRANDfog to “better understand the connection between the c-suite engagement on social channels and the subsequent attitudes of both employees and customers toward the brand” a whopping 82% of respondents reported they trust a company more when the senior leadership and CEO participate in social media channels.

To our way of thinking, when senior leaders are engaged and actively involved in social media channels (and overall social media strategy), it signifies they understand the value of social channels and real-time engagement as opposed to the age old corporate practice of hiding in corner offices and having 47 meetings before deciding to release an opinion or thought about something. Even though I sometimes want to stab my eyes out with dull forks when I hear this word, there is something to be said for transparency when it comes to CEOs and the c-suite and the huge amount of value they can add by participating in social media channels on behalf of the brands and companies they lead. Look below to see what the survey respondents had to say about trusting a company CEO who communicates by social media channels…..

The BRANDfog survey also demonstrated that when companies have buy in from CEOs and senior leadership when it comes to the integration and use of social media as a brand communication channel, it drastically impacts their overall brand credibility in the eyes of employees and consumers alike. This was reflected by a whopping 94% of survey respondents’ viewing this as important.

A final point, and again something that’s not surprising, 77% of respondents (who are employees – who also happen to be consumers) reported they are more likely to buy from a brand whose CEO and/or senior leadership uses social media channels to communicate core brand values and leadership principles. Today’s connected consumers (who also are often employees) want to know who companies are and what they stand for – and when those values and mission statements are communicated through social media channels it goes a long way toward humanizing the brand.

As a friend pointed out as we were discussing this, numbers and stats – especially in the social media space, are always something to be regarded with skepticism. With regard to this survey, it’s highly likely that the folks who actually responded to the survey are engaged in the social media space. Thus, they are naturally inclined to view senior management more favorably when they understand, embrace and view social media as worthwhile. Something to always keep in mind. 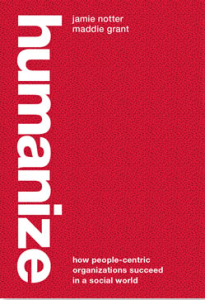 Which leads me to humanizing. Humanizing the brand is one of the foundational pillars of success for businesses today. Want to know more about that? You should. If so, a must read is Maddie Grant and Jamie Notter’s Humanize: How People Centric Organizations Succeed in a Social World.

Make no mistake, leading CEOs and senior leadership to the social media space continues to be a significant challenges for both marketers and senior leadership at companies of all sizes.  There seems to be a misconception that just because they’re not using Facebook, Twitter, LinkedIn, et al., that their peers aren’t using those channels, their customers and prospects aren’t using those channels and that their time is simply too valuable to “waste” tweeting about what they had for lunch. They just want to sell more stuff to more people, not fool around on social media networks. Do you know how many times I hear that in a given year? Aiiieeeeeeee.

Many of our clients struggle with this, and I’m sure you struggle with it, too. And often it seems as though the larger the organization, the more difficult it is to convince the c-suite that the integration of social media into the company’s overall marketing and communications strategies is worth doing. But social media marketing can, and does deliver a return on investment.

The good news is that things are getting better.  A January 2012 report by The CMO Council indicates that 60% of marketers worldwide are focused on social media engagement and buzz building as critical components of their agencies and brand strategies moving forward. And, by extension (we hope) that CEOs and the rest of the c-suite pull their collective heads out and understand that this socialization of our world – it  isn’t going away. Not by a long shot. We’ve only just begun the social media revolution and the human