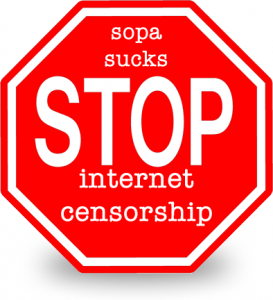 The immense and widespread backlash against SOPA (Stop Online Piracy Act) may have begun to take a toll on its author, Texas congressman Lamar Smith, who has started to back down on some of the bill’s most controversial language.

As Chairman Smith said in a press release issued Friday, “After consultation with industry groups across the country, I feel we should remove Domain Name System blocking from the Stop Online Piracy Act so that the Committee can further examine the issues surrounding this provision. We will continue to look for ways to ensure that foreign websites cannot sell and distribute illegal content to U.S. consumers.”

This is undoubtedly good news for all of those who have worked diligently to spread opposition against SOPA, yet as Adam Clark Estes writes for The Atlantic Wire, “…it’s still not time for civil rights types to start popping corks. The bill is not dead. As Chairman Smith says, the Judiciary Committee is only pumping the brakes on the progress of the bill, while Internet experts can properly study the implications of censoring the web by using DNS blocking.”

That being said, it appears that the vocal and ongoing campaign against SOPA is working. The lesson? Keep it going! If you’re passionate about stopping SOPA, now isn’t the time to be quiet. Continue to contact your local representatives and let them know how you feel about SOPA. Share your thoughts on your social networking profiles and encourage your friends and connections to get involved, too. This is a powerful example of people who are collectively wielding power to affect change, and it could just be one of the decade’s great success stories.

After all, Time magazine named “The Protestor” as its 2011 Person of the Year. There’s no reason that sort of passion, purpose and cause can’t continue well into 2012.