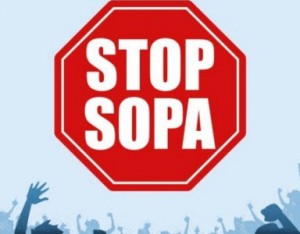 A steady—and sizable—backlash against SOPA (Stop Online Piracy Act) could bring the Internet to a grinding halt on January 18 in the form of a widespread blackout. Numerous sites who oppose the legislation, which could have a detrimental impact on the Internet, have expressed interest in blacking out their sites for a 12-hour period on January 18. Reddit has already committed to the strike.

According to an MSNBC story, other sites that have expressed interest in the strike include Facebook, Google, LinkedIn, Mozilla, Twitter, Wikipedia and Yahoo!, among others. Participating sites certainly risk consumer backlash, but as ExtremeTech writes, “There is, however, safety in numbers—and a few simple sentences identifying why the blackout is in place will ensure that the majority of the rage flows in the proper direction.”

If you’ve somehow managed to avoid discussion about SOPA, here’s a quick rundown of the legislation.

“SOPA is another one of those bills that sounds like it’s going to do something mildly positive but, in reality, has serious potential to negatively change the Internet as we know it,” writes Adam Dachis of Lifehacker. “It puts power in the hands of the entertainment industry to censor sites that allegedly ‘engage in, enable or facilitate’ copyright infringement. This language is vague enough to encompass sites you use every day, like Twitter and Facebook, making SOPA a serious problem.”

One of the (many) problems with SOPA is that the legislation enables companies to block the domain names of websites that seem to encourage copyright infringement. Not the most reassuring guidelines, right? After all, what if you post a copyrighted image to your Facebook page? Under SOPA, a claim could be brought against you because the language of the bill is so vague, and as a result, dangerous to everyone on the Internet.

What Can You Do To Help Stop SOPA?

Once you’ve made a decision on how you feel about SOPA, there are a couple of things you can do to help prevent it from passing. Call your Congressperson and tell him or her how you feel about the legislation. You can also send a letter to your state’s Congressperson through the American Censorship Day website. The SOPA vote is scheduled for January 24, so the sooner you act, the better.

What’s your take on the proposed Internet blackout? Would 12 hours of inconvenience be worth the possible power of the message? Or would you prefer to see an anti-SOPA campaign happen in other ways?