I was minding my own business, chatting with friends on Twitter this afternoon and saw a tweet that got my attention. “Chinky eyes”??? It was impossible not to go and check it out.

So that tweet led me to this TwitPic, which was a receipt given to Minhee Cho (@mintymin) when she popped into Papa John’s last night for some pizza. 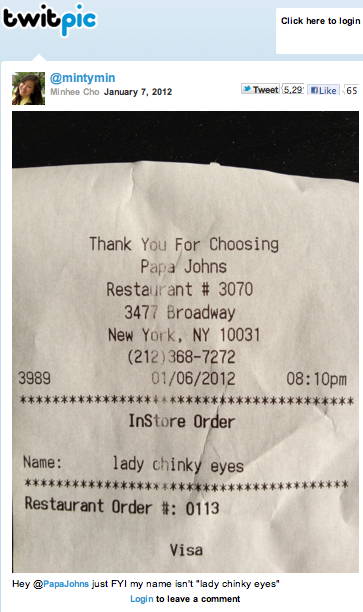 Holy moly. How would you like to be described as “lady chinky eyes?” I know I wouldn’t like it one bit. Nor would I like “middle aged hag,” “harried woman with kids” or “brunette white chick.”

The problem? Not that Papa John’s–as a brand–is rude, racist and fond of using wildy inappropriate language when it comes to describing customers. But, apparently, there’s an employee there who is. This reminds me of the idiotic Domino’s employees who took it upon themselves to do gross things to pizza and videotape themselves doing it. And I remember all the crap that Dominos took as a result of it.

Brands today are very much held hostage by the behavior of their employees. And no matter what happens, no matter when, no matter who perpetrates ugliness like this inconsiderate worker at Restaurant #1070 in New York City, the brand stands responsible. And crisis management is a 24/7 job.

When it comes to your brand, who’s in charge of that job 24 hours a day, 7 days a week? The agency you work with? Someone on your staff? Who’s monitoring the online space for brand mentions? What happens when something like this happens? Do you have a social media crisis plan in place? And it stinks that in today’s business world there’s never a time when you don’t have to be on, alert, and ever vigilant. But the reality of it is, that’s what the real time world is. And when you’re a brand–or you work for one–there’s never any time that you can relax and check out.

I feel sorry for Minhee – because it sucks to be discriminated against. And I feel sorry for the folks at Papa John’s for hiring such a nimrod. Hopefully, he or she will get what’s coming to them and find themselves out of a job. Or, at the very least, get some training about what’s appropriate and what’s not when it comes to customer service.

And hopefully consumers will be smart enough to realize that it’s not Papa John’s who’s responsible for inappropriate behavior in this case – it’s an employee without a brain. Unfortunately, I’m already seeing tweets in the Twitter stream maligning the brand in general and that’s too bad. But, haters are always going to hate. Hopefully everyone else who encounters this realizes that it’s not the brand as a whole that misstepped, it’s one very insensitive employee.