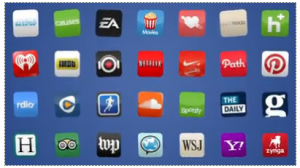 Not resting on its laurels at the number one spot in the current social media networking world, Facebook continues its quest for total social sharing domination. This time, it’s by rolling out a bevy of apps intended to maximize sharing and, we’re pretty sure, the time you spend on the social networking site.

Facebook users will have access to more than 60 apps that will bring a new level of transparency to what their friends are doing. Did you just eat an unforgettable meal at a local restaurant? Share the experience through Foodspotting. Purchased event tickets through Ticketmaster? Broadcast the details to your News Feed. Discovered the next must-have piece of furniture for your dream home on Pinterest? Pin your find straight to your Timeline.

And that’s not all. After the initial apps offering, Facebook is expected to add even more apps for a growing number of niche interests—think hobbies, sports and other categories.

Unlike other Facebook features that have been teased for weeks before they’re available, you can start adding new apps to your Timeline now (as pictured above). Since I’m a big news buff, one of my first choices was the Wall Street Journal’s WSJ Social app.

Once you enable the app’s access to your Facebook profile, you can dive right in and, in the case of WSJ Social, share what you’re reading with your Facebook friends. Katy jumped on the WSJ Social bandwagon, too, and snapped a couple of screenshots to demonstrate how the app interacts with your profile.

If you’re sensitive about privacy, each app gives you an option to adjust the sharing settings so you’re not broadcasting each individual action to your network. From what we’ve seen, access to these settings is prominently labeled on most apps, so you shouldn’t have to spend much time on this task.

And while these apps are certainly more personal, that’s exactly what they’re meant to be. As Hayley Tsukayama writes for The Washington Post, “The apps are all set up to use the ‘frictionless sharing’ function on the social network, meaning that users only have to give an app permission to share information once. After that, the app updates automatically to a user’s profile, letting their friends know instantly what they may be eating, studying or listening to at any given moment.” For the record, I hate that.

Invaluable Marketing Data? There’s An App For That

Of course, a deeper dive into Facebook’s apps shows their purpose isn’t merely altruistic. As Jessica Guynn writes for The Los Angeles Times, Facebook’s Chief Technology Officer, Bret Taylor, said “…expanding the Facebook platform would generate revenue in the ‘grand scheme’ but that the announcement was not ‘overtly’ about making money.’” Of course it isn’t!

The cool thing about the apps is that with this latest technology, Facebook’s developers are creating a site that is more intuitive. Based on what you’ve shared in the past, ergo what you’re most passionate about, Facebook’s algorithm will determine placement on your profile page – much like how the current news feed features posts and updates. These features are only available to people who have enabled the new Facebook Timeline and users are supposed to be able to manually override the placements determined by the algorithm. That, of course, will be a whole different set of blog posts. And, if past history is any indicator, not easy to find and do. Gotta love Facebook.

Yet the apps also have a benefit for the sites to which they connect. Spotify has reported a large spike in traffic from Facebook, and other increasingly popular sites like Pinterest will likely see the same effect, a result that could be a huge boon for an up-and-coming website. Plus, the new data that will result from this deeper level of sharing will be a veritable goldmine for businesses as they continually work to refine their marketing strategies.

“The more businesses large and small are able to understand the relationships between us consumers and the products we consume, the more targeted and effective they can make their marketing,” writes Jolie O’Dell for VentureBeat. “It’s only as insidious as capitalism itself, and this type of intelligence is the kind of thing that could quickly bring online advertising to its evolutionary apex—at least for now.”

Those financial perks don’t overshadow the fact that the apps are meant to give Facebook users a deeper, more meaningful experience on the site, allowing an opportunity for further profile customization and the chance to use Facebook as a tool with which to truly represent—and capture—your daily life. And it makes sense. After all, what does a “Like” truly mean? Support? Intent to purchase? Passing interest? These new apps introduce a wealth of actions to the Facebook experience: buying, reading, eating, etc. It’s a fulfillment of Mark Zuckerberg’s promise during last year’s f8 keynote.

“ ‘We’re helping define a new language for how people connect,’” he said as quoted in VentureBeat. “ ‘When we started, the vocabulary was limited to simple, inexpressive ‘Likes.’”

What’s your take on these new apps? Are you like me and annoyed by apps that want to share every article you read with your friends once you authorize it once? Or do you see yourself benefitting from the coolness factor of some of these apps such that that little detail won’t matter? Our advice, get used to it. This is just the tip of the iceberg and the first 60 of what will likely be thousands of apps. As for us, we’ll be doing our share of experimenting, in spite of the fact that there are things about apps that annoy me.