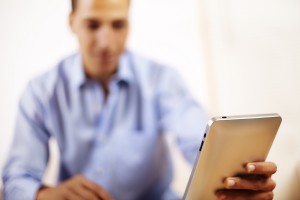 If you’re a marketer and not already focusing on tablets, now’s the time. Consumer tablet usage statistics were recently released in a study and infographic created by The Pew Research Center in conjunction with The Economist Group, and the findings collectively illustrate a key point: as mobile usage continues to increase among consumers, tablets have become more than a passing fad and should be considered an important part of your mobile marketing strategy.

What’s the appeal? To start, tablets offer the best of both worlds for consumers. For those on the go, they can easily take the tablet around to handle a variety of daily tasks like email, social networking and content consumption. For those that prefer to sit on the couch, they can easily access information or shop without lugging a heavy computer around.

A mere year and a half after the iPad launched, 11 percent of consumers report to owning a tablet device of some kind. Of that 11 percent, 73 percent use the tablet daily, while 53 percent use it to get their news. Do yourself a favor and check out the complete infographic via Hubspot.

The iPad is no longer the only kid on the block, though. He’s been joined by his friends like the Kindle Fire and the Droid Tablet. These new products have not only expanded the tablet market, but they’ve also made tablets available in a wider price range. Consumers who may have found the iPad to be cost-prohibitive now have a less expensive yet still powerful alternative, especially when it comes to the Kindle Fire. And as a result, we’ll likely see a rapid increase in the tablet audience. Hello, new customers and prospects!

This holiday season, four in five consumers are asking for a tablet instead of a laptop. As consumers demonstrate a voracious craving for content consumption on the go, marketers must be prepared with how they can easily convey information about a brand.

But why should marketers even care if the tablet is rising steadily in its quest for consumer popularity?

Consumer content and creation, people. With more than 278 million mobile subscribers in the U.S., marketers see the potential in the mobile space as a way to connect with customers. Not only are consumers on the go, but they want to be able to process information while sitting on a bus, waiting for an appointment or even while eating lunch.

In this economy, consumers are budget-conscious, and they’re multi-tasking all facets of their personal and professional lives. The lightweight design of a tablet makes it convenient and easy to throw into a briefcase or handbag and cart it wherever you need to go. The content needs to be easily digestable, and access to content is key.

Consumers are focused not only on the cost, preferring free to low-cost apps, but on the type of content and its source. Networks like Pulse can aggregate content into one place for free, but the study finds that consumers prefer to go directly to the news site. Seems to be a flashback to simpler times, when marketers and PR professionals would only pitch traditional media outlets and focus on ad placements in primetime.

Not only do consumers want a quick way to access content, but other studies have shown that those who own both a smartphone and tablet are more likely to spend money in the mobile space. Just think: if your brand is able to convey a message though content or advertising, wouldn’t that help push sales to an online or mobile store? If it’s ease of use and on-the-go mentality that the consumer wants, they won’t go to the store. Instead, they’ll seek out a mobile option—and your brand must be ready to deliver.

They will want to have it all at their fingertips.

With tablets on the rise, how do you think marketers can convey their message? Will tablets be a part of your mobile strategy in 2012? Let’s discuss in the comments below.