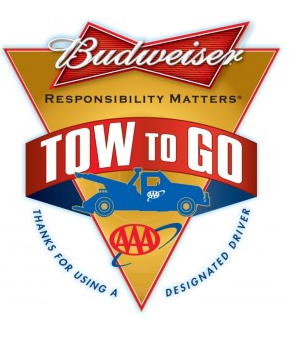 It all started with Facebook. Funny how social media can fuel a brand crisis, and in this case, by really well intentioned people. The social media , errr, crisis, that I see brewing centers around AAA’s Tipsy Tow Service for New Years’s Eve.

I saw a post in the Facebook stream this morning by someone I know in Florida. In turn, I shared his post, which included information about the AAA Tipsy Tow Service for New Year’s Eve and a phone number to call.

It promoted that anyone, anywhere could call Tipsy Tow on New Year’s Eve and get a free ride home (and a tow of your vehicle as well). Offered to AAA members and non-members alike. Holy Catballs, Batman, that’s pretty awesome.

I was impressed. What a great thing to tie your brand messaging around – ensuring people don’t drink and drive and helping them celebrate the New Year’s holiday without worrying about getting home if they party a little too much. “Bravo AAA” is what I immediately thought. And I’m a long time AAA member and huge believer in their services. And eager to share the word of this great idea with my friends. Clearly, as demonstrated by what occurred on Facebook this morning, many other folks felt exactly the same way.

Many friends shared that post, and one of my punk pals in Boston, Marc Girolimetti, also excited about it, dug a little further, and noticed that the service was sponsored by Budweiser. He made sure to mention that on Facebook and give Budweiser props for the move. Doesn’t that make the whole idea/campaign/promotion seem even smarter? To my way of thinking (and Marc’s), it certainly did. Yet another opportunity for a brand to champion safety – and the fact that it’s a brewery and a huge brand like Anheuser Busch, so much the better.

Here’s the rub. And the part where the crisis looms — the information being reported is wrong.

AAA is NOT offering the Tipsy Tow service in every location across the United States (props to my other smart friend Allen Mirales, and numerous others afterwards, for messaging me on Facebook about this – you guys are awesome).

Unable to resist, I slipped on my trusty Sherlock Holmes hat (sorry, I’ve been dreaming of RDJ ever since the first movie came out) and got busy.

When I called 800-22-4357 (AAA-HELP) the number prominently featured in every article I read online about this promotion, I was advised by a harried operator that this Tipsy Tow business is not a nationwide offering.

She advised that the phones were ringing like crazy about this (no surprise there), and the AAA Tipsy Tow New Year’s Eve Service is only being offered California, Hawaii, Texas, New Mexico and Alabama. Really?

“Not in Florida where I see it reported in the South Florida Sun-Sentinel? “ I said. “No, not in Florida,” she replied.

“Hmmm, and not in Rhode Island, where I see it reported in the Providence Headlines Examiner?” I asked. “No, not in Rhode Island” says she, understandably annoyed by my questions. Scratching head, I thanked her for her help and hung up. I’m sure she was glad.

Never one to walk away from a good mystery and truly fascinated by the way this thing was unfolding, it was impossible to let this go. I dug a little further and without too much effort found the AAA Tipsy Tow New Year’s Eve Service reported to be available in South Dakota, Nevada, Utah Georgia and Tennessee, as well as in Phoenix and Oklahoma. I’m sure there are more states reporting participation, but I’m pretty sure that by this point you’re picking up what I’m putting down.

In many of these articles local AAA representatives are being quoted about the free service but in just about every instance, the phone number being given to call for the Tipsy Tow New Year’s Eve Service is, well, the same number I called an hour ago. And once again, that’s the national AAA number 800-222-4367 (or AAA-HELP). 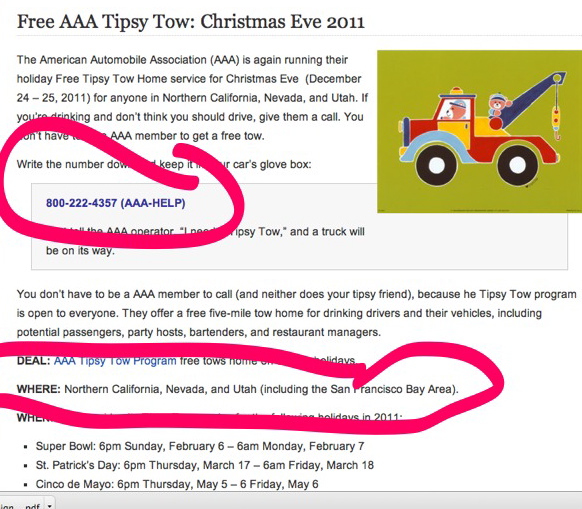 This is just one screen capture from just one of the many papers I found this reported in.

Houston, we’ve got ourselves a problem.

When a national “promotion” like this rolls out – of its own volition or otherwise — and when the people answering the national help line are confused, you can bet that bad things are brewing on the horizon.

Is there actually going to be service provided by AAA’s Tipsy Tow New Year’s Eve Service in some markets? I’m absolutely sure of it. Which markets that’s happening in is what I’m not sure of. And, apparently, AAA isn’t so sure, either.

There Is a Bright Spot

There really is a bright spot here. The good news this is happening right now, a full two, almost three, days before the New Year’s Eve holiday gets in full swing. AAA has the benefit of a little bit of time to get wind of this problem, get crisis management systems kicked into high gear communicate exactly what the promotion is and what markets it’s happening in and to do whatever damage control they can to protect the AAA brand.

What To Do Now?

Social media plays a different role in company crisis management, and can enhance a brand’s traditional crisis management efforts, which are usually largely PR focused. Hopefully AAA has had the foresight to get both of these plans in place.

To our way of thinking, the national AAA PR team should get involved and the team handing their social media should also dive in, and all the local AAA chapters should likewise be involved. And their efforts shouldn’t be siloed, they should be working in conjunction with one another.

As an aside, I checked the AAA Facebook page right before hitting the “publish” button and there is not only no mention of the Tipsy Tow program at all, it doesn’t appear as though AAA has yet gotten wind of this brouhaha. And I searched Twitter and find that the Tipsy Tow offering is being lightly promoted at the present time, and I predict those mentions will start picking up pretty quickly.

This is Where Brand Monitoring Can Save Your You-Know-What

Do you think AAA, and Budweiser, and all the local AAA chapters in states across the United States have social media listening programs in place, monitoring the Internet for brand mentions and watching this situation develop into a social media crisis? I hope so. Because a whole lot of angry consumers blasting AAA – or Budweiser – for something they thought they could count on but which turned out to be inaccurate would not be a fun way to kick off a New Year. No way, no how.

This is the kind of situation where reliance on Google Alerts, which is great and free, but doesn’t always have the ability to report real-time results, can get you and your brand in trouble. If you’re not yet using social media monitoring tools to listen for brand mentions and alert you to a potential crisis in the works, now might be the time to explore some and factor that into your 2012 budget line items.

In summary, I’m a big fan of AAA – and of this holiday promotion. I wish them all the best in getting their arms around this situation and will be anxious to see how it all plays out.

And if you’re headed out to party it up for New Year’s Eve, if there’s even the slightest chance that you might drink more than one drink, do yourself a favor and check into whether this service – or something similar – is offered in your city. And then, use it. Because drunk drivers kill people. And nobody needs that.