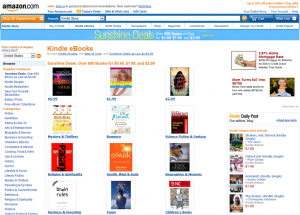 Amazon has been making some big moves in the world of e-commerce since June, and both consumers and competitors are paying attention.

In June,  Amazon sold one of the most highly anticipated albums, Lady Gaga’s Edge of Glory, for $0.99 — and took down some of their servers in the process. Even though many consumers snagged the album at a very low price, many were unable to download or listen to the album in full. Despite their server stalling out and selling the album at a loss – Amazon purportedly sold 440,000 copies of the album or about four times the amount of albums iTunes sold.

Pretty smart marketing promotion for a company that would normally pay through the nose to do a promotion with a pop icon and veritable money machine that is The Gaga. Oh, and the fact they just launched their Cloud Drive music service and were able to promote it throughout this Gaga-mania probably didn’t hurt at all.

In addition to their Cloud service, Amazon also started shaking up the e-book market by rolling out their Sunshine Deals promotion. This promotion offered up some well-known titles alongside guilty pleasure books at a deep discount.

Yeah, put down Hunger Games for a minute — you might want to hear about this. Why? Because after Amazon opened up this sale in early June, in one week these Sunshine Deals have drove the average price of bestselling Kindle titles down 17% from an average of $7.75 per e-book to $6.43. Amazon Sunshine Deals were a test to see how discounts paired with on-site special offers would entice buyers. And entice it certainly did – it will be interesting to see if e-books on the Sunshine Deals list start sneaking their way on to the 100 Bestsellers List.

A big hat-tip to Beth Harte for giving us the heads up on the Sunshine Deals. Amazon has survived being sued by Barnes and Noble, Wal-Mart and even survived the Dot-Com Bubble Burst. As they say in their company profile, Amazon believes in innovation and customer-centric service. These two promotions are great examples of innovative marketing that benefits their customers.

Amazon is shaking things up but is it enough stand out against Apple’s iPad, Cloud and iTunes? If they get the technical issues fixed and consistently offer better deals on music and e-books can they actually compete?